The former Brazilian footballer was arrested by the Paraguayan police on March 06, 2020, with his brother-cum-agent and since then were ordered to remain in prison till the completion of the investigation. 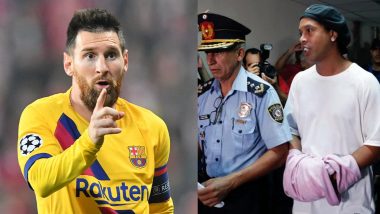 It appeared that Ronaldinho, who is in Paraguayan jail for the possession of a fake passport, will have some relief coming his way as his former Barcelona teammate Lionel Messi will pay the legal fees. However, Messi's advisors have refuted the report and made it clear that the Argentine footballer will not help Ronaldinho financially. It was earlier reported that Messi would pay £3.25 million in legal fees to bail Ronaldinho out of prison. Ronaldinho Scores Multiple Goals During Paraguayan Prison Tournament (Watch Video).

Sport, a Catalan publication, now claims that earlier reports stand baseless. "Messi is very sad about Ronaldinho's personal situation, but at no time has he made any economic or judicial movement to remove the Brazilian ex-footballer from jail. He has not put his lawyers to work on the case nor is he going to pay the four million euros of bail," Sport published.

The former Brazilian footballer was arrested by the Paraguayan police on March 06, 2020, with his brother-cum-agent and since then were ordered to remain in prison till the completion of the investigation. Ronaldinho in Jail Poses for Pictures and Smiles As He Gets Used to Life in Paraguayan Prison after Arrest over Possessing Fake Passport.

Meanwhile, Ronaldinho and his brother lost a fresh appeal wherein the duo wanted to be placed under house arrest and not in jail. Paraguay's Appeal Court denied the request and said the pair posed a "medium to high" flight risk in case their prison situation is modified.

(The above story first appeared on LatestLY on Mar 16, 2020 12:19 PM IST. For more news and updates on politics, world, sports, entertainment and lifestyle, log on to our website latestly.com).