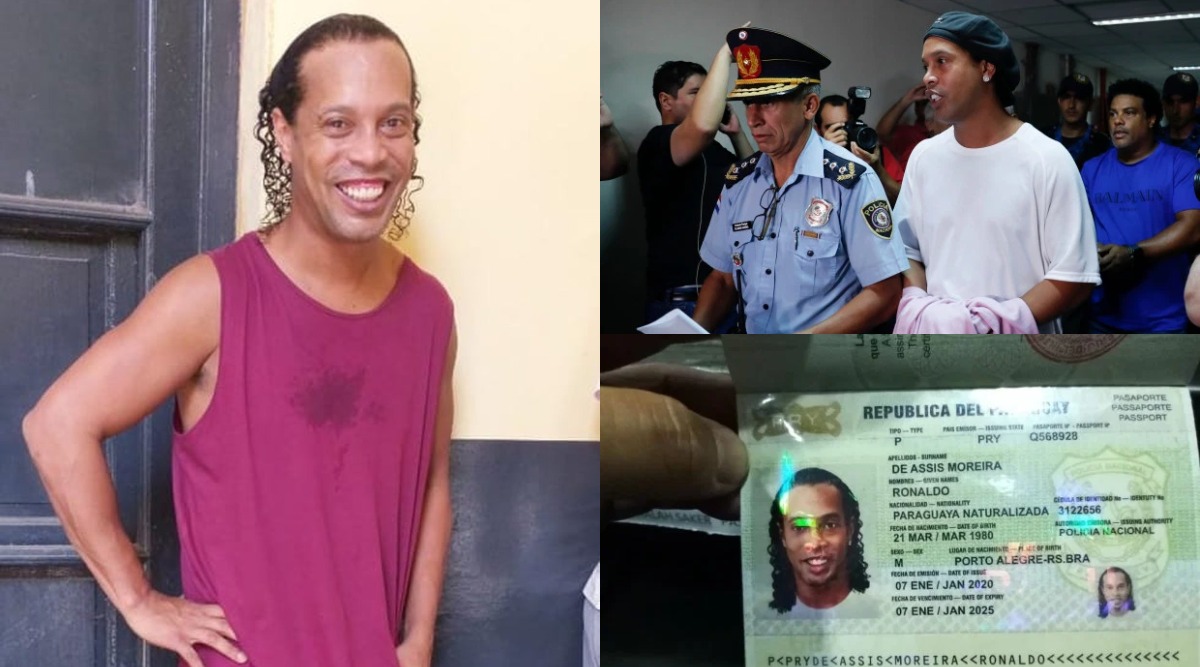 Ronaldinho and His Brother Were Arrested For Fake Passports (Photo Credits: Twitter)

Brazil football superstar Ronaldinho was called “stupid” by his lawyer after the footballer posed for pictures and was seen smiling in a Paraguayan jail having been caught arrested in a fake passport case. Ronaldinho’s lawyer Adolfo Marin insisted that the former Barcelona and AC Milan footballer had no idea and “did not understand” that was committing a grievous mistake by entering Paraguay with forged documents. Meanwhile, the footballer was pictured taking into his life and adjusting as a prisoner in the cell with a broad smile on his face. According to reports from the Paraguayan media, Ronaldinho posed in a purple vest, a quarter pant and slippers in the prison. Ronaldinho Fake Passport Row: Former Brazilian Footballer Ordered to Remain in Paraguayan Jail.

Ronaldinho and his brother and manager Roberto Assis were arrested on Friday for entering Paraguay illegally with falsified documents. The Brazilian pair were taken to court on Saturday and has been ordered to be kept in custody as long as the investigation is on with prosecutors also indicating that perhaps “other crimes were also committed.” Both Ronaldinho and his brother were caught with fake Paraguayan ID cards.

Ronaldinho and His Brother Roberto Assis Sent to Prison

The Paraguayan court has accused Ronaldinho and his brother of committing a “grave and punishable offence against the interests of the Republic of Paraguay.” “There is a flight risk and there is a danger of obstruction. We are dealing with a foreigner who entered the country illegally and who remained in the country illegally,” the court added. But Ronaldinho’s lawyer defended him by saying that the footballer had no idea that he was committing a crime as he “didn’t understand that he had been given false documents.”

Ronaldinho and Assis travelled to Paraguay to participate in a children's charity event and promote a new book. They have denied any wrongdoing and said they were presented with the passports as a "gift" upon arriving at Asuncion's international airport on Wednesday morning.

In November 2018, the brothers had their passports seized by Brazilian police after failing to pay a fine resulting from a 2015 court case. They recovered the passports last September -- effectively ending a 10-month foreign travel ban -- upon paying a million-dollar fine for building a fishing platform without environmental permits.