Lionel Messi Suffers Worst Defeat With Barcelona’s 8–2 Humiliation vs Bayern Munich: Take a Look at 5 of the Heaviest Losses in Argentina Star’s Career 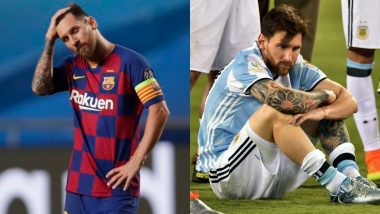 Bayern Munich trounced Barcelona 8-2 in the UEFA Champions League quarter-finals leaving the Spanish club starring at their worse defeat in almost 80 years. Barcelona were humbled and humiliated by the German club, who scored four apiece in each half to record a resounding win. So worse was the performance from Barcelona that of the 10 goals scored in the match, Barcelona managed only one – A Luis Suarez goal while the other of their goal was a David Alaba own-goal. Lionel Messi ended the match without a goal having just experienced the worse defeat of his 16-year football career. Lionel Messi and Barcelona Register Worse Records in Humiliating 8–2 UCL 2019–20 Defeat Against Bayern Munich.

Messi, a six-time Ballon d’Or winner, was left hanging his head in shame as his side conceded eight goals. The captain of the Barcelona team will certainly remember this defeat for the rest of his career as will the other players. This was Barcelona’s worse defeat in their European and Champions League history and also their worse loss since the 8-0 Copa del Rey in 1946. Messi though has suffered some worse defeats in his career. As he faces yet another shambolic loss with Barcelona, take a look at some of Messi’s worse career defeats. First Lionel Messi and Then Own Goals: Humiliating Record Shows Barcelona Depend More on Argentine and Opposition Own Goals After 8–2 Defeat Against Bayern Munich.

Thomas Muller scored the opener within four minutes and the floodgates just opened. Barcelona had equalized through a David Alaba own-goal three minutes after conceding but fell 4-1 behind within the opening half-hour. They looked like they will concede every time Bayern charged forward. Barcelona conceded four more in the second half after Luiz Suarez had pulled one back. Their on-loan player Philippe Coutinho also added injury to the wound with a brace in four minutes towards the end.

The South American football giants were thrashed 6-1 by Bolivia with their striker Joaquin Botero netting a hat-trick in 2009. The match was part of the 2010 FIFA World Cup qualifier and Argentina’s heaviest defeat in 60 years. To add to Argentina’ woes Angel di Maria was also sent-off for them. Luis Gonzalez scored Argentina’s solitary goal that night as the Diego Maradona-coached side suffered an embarrassing defeat against their minnow neighbours. This loss, until Friday, was the heaviest defeat in Messi’s career.

Real were already the La Liga champions and Barcelona first had to bore the embarrassment of giving their arch-rivals a guard of honour in El Clasico. But that was just the first of a long night of embarrassments for the Catalan club. Captain Raul put Real ahead within 12 minutes and Arjen Robben headed in a second. Real came out in the second half and Gonzalo Higuain and Ruud van Nistelrooy added two more.

Thiery Henry scored a mere consolation to the end. Barcelona had ended that season without a trophy and manager Frank Rijkaard was hauled-off at the end of the season. Co-incidence anyone?

Another Bayern Munich vs Barcelona Champions League match and another thrashing for the Blaugrana side. Wait, there was another repeat. A Thomas Muller double. And like in Lisbon on Friday, Muller had given Bayern an early lead. Mario Gomez than doubled it and Arjen Robben tormented the Barcelona defence before adding a third.

Muller then completed his brace towards the end. This was Barcelona’s worst European defeat since 1997 then. Dynamo Kiev had beaten them by the same margin in 1997. Barcelona went to lose 7-0 on aggregate score against Bayern that season. But that, of course, is history now.

Another of worse nights in Lionel Messi’s career. The Argentine failed to inspire his side to a win in regulation time then saw them lose 4-1 on penalties against Chile in the 2015 Copa America final. Messi scored from the spot but Gonzalo Higuain and Ever Banega missed while Chile scored all four.

A year later, they will meet again in the same tournament and suffer the same fate with Messi missing from the spot this time for another heartbreak.

(The above story first appeared on LatestLY on Aug 15, 2020 01:54 PM IST. For more news and updates on politics, world, sports, entertainment and lifestyle, log on to our website latestly.com).