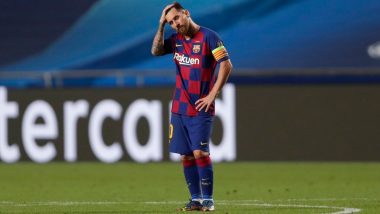 Barcelona were completely demolished and beaten to dust by Bayern Munich in the 8-2 defeat in UEFA Champions League 2019-20 quarter-final clash. This was the worst defeat Barcelona had ever faced in a UCL knockout match and their worse scoreline since the 8-0 loss to Sevilla in 1946. It was a strange game given Barcelona had the first chance to score within the opening two minutes before Thomas Muller netted on the opposite end and Bayern took over from there. What was more humiliating for Barcelona was they conceded more goals than the shots they managed on target. Take a look at some records and stats from the match. First Lionel Messi and Then Own Goals: Humiliating Record Shows Barcelona Depend More on Argentine and Opposition Own Goals After 8–2 Defeat Against Bayern Munich.

Robert Lewandowski achieved an amazing feat of netting 50 Champions goals for Bayern Munich although it seemed at one stage that the Polish striker could end goalless in a goal-fest match. But he eventually found the net in the 82nd minute from a Philippe Coutinho cross to reach a half-century of goals for Bayern in the UCL. He also took his season’s UCL goal tally to 14 making him the fourth-highest goalscoring player in a single UCL season. Cristiano Ronaldo holds the top three spots. Take a look at the record from the Barcelona vs Bayern Munich match. Barcelona Have Sacked Manager Quique Setien After the 8–2 Humiliation Against Bayern Munich in UEFA Champions League 2019–20 Quarter-Final, Say Reports.

# Robert Lewandowski has now scored 50 Champions League goals for Bayern Munich. This was only his 60th appearance for the Bavarians. Only Cristiano Ronaldo has taken fewer matches (50 matches) to complete a half-century of goals for a single side. Lionel Messi reached 50 goals in 66 matches for Barcelona

# Lewandowski also took his goalscoring tally in this season’s Champions League to 14 goals. He has now scored fourth-most goals in a single edition of the UCL. Ronaldo holds the top three spots. He scored 17 in 2013-14, 16 goals in 2015-16 and 15 in 2017-18. Lewandowski has at least one more game to play this season

# The 31-year-old has also netted a goal in his eighth successive UCL appearance. Only three other players have done it before. Ronaldo did it twice in 2014 and 2018, Rudd van Nistelrooy scored nine goals in 2003 and Luis Aragones in 1970.

# The 8-2 defeat was Barcelona’s worse loss in European competitions. They had never before conceded so many in Europe.

# Lionel Messi also experienced his worse defeat in his 16-year football career. The previous worst defeat he had faced before this was against Bolivia where Argentina lost 6-1

# Bayern Munich have now scored 26 goals in their last six Champions League games and are the only side to win all of their nine UCL games this season. If they win the title, Bayern will break Barcelona’s record of 10 consecutive wins in UCL

# This is also the first time in 15 years that Cristiano Ronaldo or Lionel Messi will not be part of Champions League semi-finals. The last time it happened was in 2004-05

# Luis Saurez scored Barcelona’s only goal against Bayern Munich. This was his first Champions League goal outside Camp Nou since 2015

# Barcelona ended the season without a single trophy making it the first time since 2007-08 that they have finished a season trophyless.

It was beyond disappointment for Barcelona and perhaps their lowest moment in over decades. Reports have already emerged that the club have sacked Quique Setien post the humiliating defeat. Questions have also been raised whether Messi should continue at Barcelona or leave for another club.

(The above story first appeared on LatestLY on Aug 15, 2020 12:10 PM IST. For more news and updates on politics, world, sports, entertainment and lifestyle, log on to our website latestly.com).