Lionel Messi paid a wonderful tribute to late Diego Maradona by celebrating his goal against Osasuna in iconic Newell's Old Boys shirt, which had Maradona's No 10 on the back. Messi scored Barcelona's fourth goal of the match and took off his Barcelona shirt to show the Newell's Old Boys jersey he was wearing underneath. 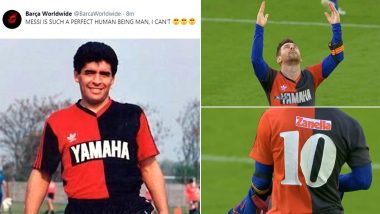 Lionel Messi paid a wonderful tribute to Diego Maradona after scoring a stunning goal against Osasuna in La Liga 2020-21 on Sunday. Messi scored Barcelona’s fourth goal of the match and celebrated by taking off his jersey and pointing to heavens. Beneath his Barcelona jersey, Messi was wearing the iconic Newell’s Old Boys jersey with the no 10 at the back. He looked to the heavens and pointed both of his hands giving his respects to the late football icon. Maradona sadly passed away on November 25 (Wednesday) after a sudden cardiac arrest in his home. Lionel Messi Gets Emotional While Mourning the Death of Diego Maradona, Barcelona Pays Tribute to Late Football Star.

Messi gave an emotional and beautiful tribute to Maradona with the Barcelona talisman celebrating wearing a Newell’s Old Boys jersey. Maradona played seven matches for the Argentina first-division club after leaving Sevilla. Messi started his career with Newell’s and has performed tricks with football at half-time when Maradona made his debut for the club in 1993. Messi was seven-year-old when Maradona returned to Argentina after his spell in Europe and joined Newell’s Old Boys. Watch Messi's goal against Osasuna and also his tribute to Maradona. Lionel Messi Mourns Diego Maradona’s Death, Says ‘Will Keep All Beautiful Moments Lived With Him’ (View Pics From Post).

LIONEL MESSI WHAT A GOAL 🤯🚀🐐 pic.twitter.com/J7KsvnEiuJ

He scored in the 74th minute and celebrated by taking off his Barcelona jersey and showing the iconic Newell’s Old Boys Jersey he was wearing beneath. The jersey had a No 10 at the back, which was the same number Maradona wore throughout his career and also during his spell at Newell’s Old Boys. Messi, wearing the jersey, pointed to the heavens with his both hands and paid a fitting tribute to the great man.

I love this so much ❤️ pic.twitter.com/zQx5PMpanL

Messi celebrates his goal with a. tribute to Maradona ❤️ pic.twitter.com/VNQHNd2f2A

Maradona passed away this Wednesday after a sudden cardiac arrest at his home where he was recovering from the brain surgery he had undergone recently to remove a blood clot. He was 60 at the time of his death. Messi had already paid his tributes to Maradona on social media after the Argentina football great breathed his last. Barcelona, meanwhile, beat Osasuna 4-0 with Martin Brathwaite, Antoine Griezmann and Philippe Coutinho scoring the other three goals.

(The above story first appeared on LatestLY on Nov 29, 2020 08:40 PM IST. For more news and updates on politics, world, sports, entertainment and lifestyle, log on to our website latestly.com).