Lionel Messi mourned the sad passing away of Diego Maradona and paid his respects to the late football great. Maradona, 60, died on November 25 after suffering a sudden heart attack. He was in his home after being released from the hospital two weeks ago following successful brain surgery to remove a blood clot. 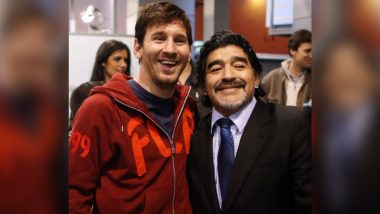 Lionel Messi joined the world in paying his tribute to late Deigo Maradona, who sadly passed away after suffering a cardiac arrest in his home on November 25 (Wednesday). Maradona was 60 at the time of his death. Messi, who played under Maradona when the latter was coach of the Argentina national football team at the 2010 FIFA World Cup, mourned the football legend's sad demise and paid his respects to the Argentina legend. Messi said he will remember all the beautiful moments he shared with the little magician. Messi said he was shocked to hear Maradona’s untimely demise but also asserted Maradona, despite his sad passing, will ‘not go away’ as he is ‘eternal.’ Cristiano Ronaldo Reacts to Diego Maradona’s Death, CR7 Pays Tribute to 'Eternal Genius'.

“A very sad day for all Argentines and for football. He leaves us but does not go away, because Diego is eternal,” the Barcelona and Argentina talisman wrote on Instagram alongside two pictures of himself with Maradona. “I keep all the beautiful moments lived with him and I wanted to take the opportunity to send my condolences to all his family and friends. RIP” Messi wrote.  Diego Maradona Passes Away at 60: A Look At The Best Moments in Argentine Great's Footballing Career.

Messi is often considered to be the true heir to Maradona’s throne at both Barcelona and in the Argentina football. Both players play identical football and are popular for their vision, passing, ball control and dribbling skills.

Maradona captained Argentina to the World Cup title in 1986 scoring perhaps the greatest goal in football in that tournament. It was also here that he scored his infamous ‘Hand of God’ goal for Argentina. Maradona was also a success story in club football and numerous trophies with each club he played for. His best spell, however, came at Napoli, who he joined from Barcelona in 1984 and led the club to their first-ever Serie A title in 1987. Maradona also led Napoli to a third Serie A title in 1990 among other titles. Rest in Peace Legend!

(The above story first appeared on LatestLY on Nov 26, 2020 12:28 AM IST. For more news and updates on politics, world, sports, entertainment and lifestyle, log on to our website latestly.com).