Manchester United are edging closer to complete the signing of Tyrell Malacia from Feyenoord. According to reports, the Dutch defender would cost the Red Devils around $18 million. 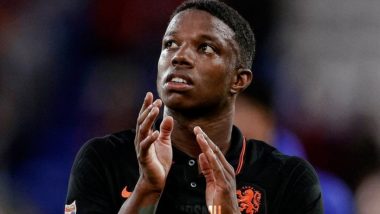 Manchester United look to complete their first signing this summer as the club have agreed to pay $18 million asking price of Feyenoord for Tyrell Malacia, according to The Athletic. The full-back has been considered as a perfect replacement of the shaky left-backs of United. The Red Devils had to travel extra mile to getting closer to this deal as Lyon reportedly had a verbal agreement with Feyenoord. According to the reports, Lyon almost signed the Dutch defender, but Manchester United hijacked the deal from them and started further proceedings in the potential signing before finding a breakthrough in the meeting with the Dutch club. It is understood that United went all out for this deal due to their newly appointed coach Erik Ten Hag's admiration for the Dutch full-back. Amid Cristiano Ronaldo Transfer Rumours Manchester United Players Return to Carrington Training Camp (See Pics).

The 23-year-old defender is a priority transfer target for Ten Hag as the former Ajax coach is poised to bolster Manchester United backline which was heavily criticized for continuous poor performances last season, The Athletic reports.

Meanwhile, this signing can be a sign of relief for the United management who are currently reeling on the fear of losing their talisman, Cristiano Ronaldo, who has reportedly expressed his unhappiness to the club for their lack of transfer activity this summer. Reports suggest that Ronaldo has been linked with a move to Chelsea as the Blues' owner and the player's agent had a meeting earlier this week.

(The above story first appeared on LatestLY on Jun 29, 2022 05:04 PM IST. For more news and updates on politics, world, sports, entertainment and lifestyle, log on to our website latestly.com).