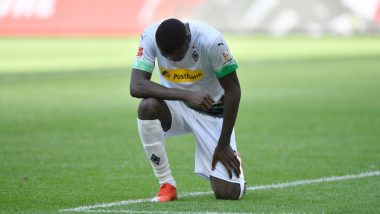 Berlin, May 31: Borussia Moenchengladbach routed Union Berlin 4-1 on Sunday to go third in the Bundesliga with French striker Marcus Thuram scoring twice and taking a knee in protest at the death of an unarmed black man in the United States.

"Marcus has made the point. He has set an example against racism that we all support," Gladbach coach Marco Rose said of Thuram's protest. First-half goals by midfielder Florian Neuhaus, who bagged Gladbach's 3,000th goal in the Bundesliga, and Thuram put Gladbach 2-0 up at the break when he headed home unmarked at the far post. George Floyd Death: Schalke Midfielder Weston McKennie Joins Protest With ‘Justice for George’ Armband, Kylian Mbappe Shows Solidarity.

The 22-year-old French striker then took a knee on the Borussia Park turf, imitating NFL star Colin Kaepernick. "No explanation needed," wrote Borussia Moenchengladbach on the club's official Twitter account. It was the latest show of Bundesliga solidarity with the current protests sweeping the United States.

Schalke's US midfielder Weston McKennie wore an armband in Saturday's defeat to Werder Bremen bearing the words "Justice for George". George Floyd, 46, died in Minneapolis during an arrest by a police officer who pinned him to the ground for several minutes by kneeling on his neck.

Just after the break in Gladbach, Union's Swedish striker Sebastian Andersson pulled one back after being left unmarked. Gladbach pulled away when Thuram added his second after pressing the Union defence. Alassane Plea then grabbed a goal of his own for Gladbach, having set up Thuram's first, when he fired home off his left foot to make it 4-1 on 81 minutes when he beat Union goalkeeper Rafal Gikiewicz.

After the final whistle, the Gladbach squad celebrated in front of terraces filled with cardboard figures of fans. There were 15,000 cut-outs on the terraces at Borussia Park with home supporters paying 19 euros ($21) each to have their image at the game as fans remain shut out to prevent the spread of the COVID-19 virus.

After a 3-1 defeat to Leverkusen last weekend, and a goalless draw with relegation-threatened Werder Bremen on Tuesday, this was an important win for Gladbach. It lifted them to third in the table, but RB Leipzig can take their place if they win at Cologne on Monday. Coco Gauff Joins Protests Over Death of George Floyd in Police Custody, Asks ‘Am I Next’ in Video Listing People of Colour Killed.

On Saturday, reigning champions Bayern Munich opened a 10-point lead with a 5-0 thrashing of Fortuna Duesseldorf with the league's top-scorer Robert Lewandowski netting twice. Later Sunday, second-placed Borussia Dortmund can trim Bayern's lead if they win at bottom side Paderborn.

(The above story first appeared on LatestLY on May 31, 2020 10:25 PM IST. For more news and updates on politics, world, sports, entertainment and lifestyle, log on to our website latestly.com).