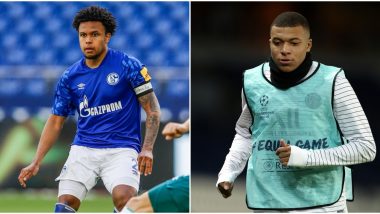 Kylian Mbappe and Schalke midfielder Weston McKennie have shown their support for George Floyd and expressed solidarity with protests across the United States which have demanded justice for Floyd and a stop of hate-crime against black people. Floyd, an African-American man died while being restrained by the Minnesota police. PSG forward Mbappe tweeted using the hashtag #JusticeforGeorgeFloyd while US International McKennie displayed his support by wearing an armband with the message “Justice for George” during the Schalke vs Werder Bremen Bundesliga 2019-20 match. George Floyd Death: NFL Calls for Urgent Action.

Floyd’s tragic death sparked controversy and outrage across the country after a video of the 59-year-old being subject to inhuman treatment by a Minnesota police officer went viral went on the internet. In the video, the police officer was seen kneeling and pressing his knee on the neck of a handcuffed Floyd even as the latter shouted out his difficulty in breathing and pleaded for help. He died in police custody hours later. The officer has since been charged with murder and manslaughter but protestors have raged asking a rue amendment to prevent any such future incident. Coco Gauff Joins Protests Over Death of George Floyd in Police Custody, Asks ‘Am I Next’ in Video Listing People of Colour Killed.

To be able to use my platform to bring attention to a problem that has been going on to long feels good!!! We have to stand up for what we believe in and I believe that it is time that we are heard! #justiceforgeorgefloyd #saynotoracism pic.twitter.com/TRB1AGm0Qx

Mckennie also took to social media after the match and said that he was glad that he could use the platform to stand up for something that he believed in. "To be able to use my platform to bring attention to a problem that has been going on to long feels good!!! We have to stand up for what we believe in and I believe that it is time that we are heard!” said the 21-year-old. Schalke also shared a picture of Mckennie using the same hashtag as Mbappe.

The midfielder’s hometown of Texas have erupted with violent protests since Friday and many have also been forcefully arrested by the police. Mckennie, however, wasn’t the first US soccer star to voice his support for Floyd. US women’s soccer team players and World Cup-winning stars Crystal Dunn and Alex Morgan also spoke their support as did tennis rising star Cori Coco Gauff.

Mckennie though was unable to prevent his side from succumbing to another defeat on the pitch. Schalke lost 0-1 at home to a relegation battling Werder Bremen with Leonardo Bittencourt’s first-half proving enough for the visitors. Schalke have now lost six of their last seven matches and are now 11 games without a win. The defeats have hampered their bid for a top-four finish in the Bundesliga this season.

(The above story first appeared on LatestLY on May 31, 2020 01:12 PM IST. For more news and updates on politics, world, sports, entertainment and lifestyle, log on to our website latestly.com).