Before facing defending champions Germany in the FIFA World Cup 2018 opener, Mexico will be playing an international friendly match against Denmark on June 9 at Brondby Stadium in Copenhagen. 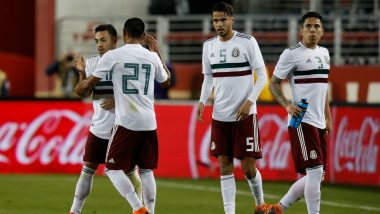 Juan Carlos Osorio is not a popular coach with Mexico as his constant tinkering with the Mexican team lineup has not gone well with players and fans. But the coach is not much concerned as long as the results go his way. His players too are performing well in the domestic leagues across the world particularly Hector Herrera who guided his club FC Porto to a championship in Portugal. Comparing it with previous squads, Osorio finds his current squad as a tinge ahead in balance and one that can go far in the FIFA World Cup 2018 in Russia. FIFA World Cup 2018 Schedule in IST for PDF Download: Fixtures, Groups, Time Table with Match Timings & Venue Details of Football WC in Russia.

There are injury concerns with defenders Diego Reyes and Nestor Araujo, but former AS Roma man Hector Moreno is an experienced man for Mexico in the back line. The injuries also mean there is a high chance of less experienced defenders like Oswaldo Alanis, Hugo Ayala and Edson Alvarez being drafted into the team. Guillermo Ochoa, who became a household name after his heroics in the 2014 World Cup in Brazil, should start in goal for Mexico in Russia too.

The midfield is significantly boosted by the presence of Hirving Lozano who is having the time of his life with PSV Eindhoven scoring for fun. He should team up with Hector Herrera and Andres Guardado as the central playmakers. The forward department sees a strong tussle between Javier Hernandez and Raul Jimenez with Hernandez lack of playing time going against him.

Mexico finished top of the fifth round of the CONCACAF World Cup Qualifiers with 21 points. They won six matches out of ten and along with Costa Rica and Panama booked their place in Russia via the automatic qualification route. Hirving Lozano was their top scorer with 3 goals while Javier Hernandez finished with 2.

Mexico, playing in Group A of the 2014 World Cup in Brazil won their opening game against Cameroon and followed it up with a goalless draw against mighty Brazil. They met Croatia in the last match of the group stage and thumped them 3-1 to finish second behind Brazil, although level on points with them with 7. Mexico’s Round of 16 clash with the Netherlands was marred by a dubious last-minute penalty awarded to the Dutch with the tie at 1-1. Klaas Jan Huntelaar scored from the spot to knock Mexico out of the World Cup.

Hector Herrera: The FC Porto midfielder is one of the leaders of the team, and his attributes include driving the team from midfield. He can also break the opposition play and as was evident from his strike against Benfica in a league game, come up with crucial goals.

Guillermo Ochoa: ‘The Great Wall of Mexico’ as he is popularly known as in Mexico is one of the best goalkeepers’ in world football. He will have to be at his best in Russia as the Mexican defense depleted by injuries need a good goalkeeper to bail them out at difficult moments.

Before facing defending champions Germany in the FIFA World Cup 2018 opener, Mexico will be playing an international friendly match against Denmark on June 9 at Brondby Stadium in Copenhagen. El Tri will be playing Germany on June 17 at Luzhniki Stadium, Moscow. They will next play other two teams placed in Group F – vs. South Korea on June 23 and vs. Sweden on June 27.

(The above story first appeared on LatestLY on May 23, 2018 01:42 PM IST. For more news and updates on politics, world, sports, entertainment and lifestyle, log on to our website latestly.com).