The star forward has had a great season so far, topping both the goalscoring and assists' charts in the Premier League. He has however, only 18 months left on his current contract with Liverpool. 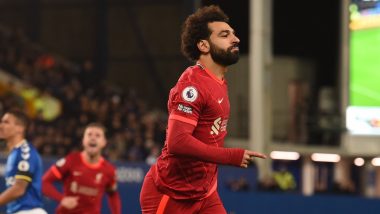 Mohamed Salah has grown in stature as one of the world's best forwards during his time in Liverpool and the striker is keen on continuing his stay at the Merseyside club, according to reports. This season, the Egyptian forward has been on fire this season with 13 goals and nine assists to his name already, topping the table in both categories. However, despite his desire to remain at Liverpool amidst transfer rumours, he has left this decision up to the management. Noted Italian football journalist Fabrizio Romano took to Twitter to share Salah's thoughts where the striker said, "If the decision is up to me, I want to stay in Liverpool. But the decision is in the hands of the management." Jude Bellingham’s Comments on Referee Felix Zwayer After Borussia Dortmund’s Defeat to Bayern Munich Being Investigated by Police

“There is no problem but we have to reach an agreement for the contract. It’s up to Liverool board”, he said to MCB via @livechonews. 🇪🇬 pic.twitter.com/rbtK7nDyoU

"There is no problem but we have to reach an agreement for the contract. It’s up to Liverpool board," he further added.

The star forward has eighteen months remaining on his Liverpool contract and if reports are to be believed, then he is likely to stick around with Jurgen Klopp's Liverpool. The Reds have had a pretty good season so far, sitting second on the points table with just one point less than leaders Manchester City. They, along with City and Chelsea are very much in the title race.

(The above story first appeared on LatestLY on Dec 06, 2021 06:29 PM IST. For more news and updates on politics, world, sports, entertainment and lifestyle, log on to our website latestly.com).