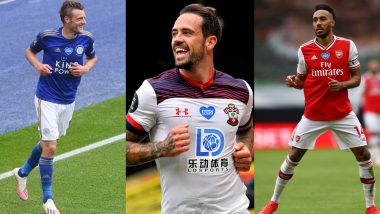 Liverpool’s near-invincible run this season made the Premier League 2019-20 title race almost a one-team contest especially after Manchester City’s shock defeat to Norwich and Wolves and a 2-2 draw against Newcastle United towards the early part of the season. Liverpool went on a rampaging run and didn’t lose a single game in the Premier League until February when Watford thrashed them 3-0. The race for the golden boot, however, hasn’t been a one-player contest despite Liverpool’s dominance in results. The race for most goals scored in EPL 2019-20 has been a three-way race between Jamie Vardy, Danny Ings and Aubameyang. Most Goals in EPL 2019-20: Raheem Sterling Overtakes Cristiano Ronaldo on the List.

As Premier League nears its business end. Players have certainly stepped and have found the net in regular instances. But Vardy, Ings and Pierre-Emerick Aubameyang have been a touch above the rest. The Leicester City, Southampton and Arsenal strikers are the only three players to have crossed the 20-goal mark so far in the current season. Mohamed Salah and Raheem Sterling, who are on 19 goals, may still get there with two league games still to play. Take a look at the top-five goal-scorer of EPL 2019-20.

The Englishman is already two goals clear at the top of the Premier League 2019-20 goalscoring chart having already struck 23 times. At the start of the league, Vardy appeared to be running away with the golden boot with 13 goals in his first 10 matches. But the goals seem to have dried for him since the restart. He has managed to score only four times in eight matches since the restart.

The former Liverpool and Burnley man seems to have revitalised his career after a summer move to Southampton. In his second season with the Saints – he played 2018-19 season on loan from Liverpool – Ings has found the net 21 times and is second in the golden boot race. He still has two games in hand to match Vardy’s tally. Ings, with his goal against Brighton, became only the third Southampton player to score 20 goals in Premier League in the club’s history.

The Gabon striker has scored 20 goals in each of his three seasons at Arsenal and has one of their few bright spark in an otherwise disappointing season. Arsenal are placed 10th in the points table but they could have been much below if not for Aubameyang to score some vital match-winning goals. He scored both the goals in Arsenal’s FA Cup semi-final win against Man City and will be confident of scoring more in the league.

The Egyptian could go as one of Liverpool’s best ever signings. In just three seasons at the club, Salah has already scored 74 goals and was the joint golden boot winner along with Liverpool teammate Sadio Mane and Aubameyang. He needs one goal to reach the 20-goal mark. Liverpool are still to play Chelsea and Newcastle United in their final two league matches this season and Salah will hope he can net a couple more.

With his brace against Watford, Sterling overtook Cristiano Ronaldo’s tally of Premier League goals. Ronaldo scored 84 goals in four seasons at United while Sterling now has 85 EPL goals. The Englishman has been in devastating form since the restart and has scored eight goals, including a hat-trick against Brighton, in 10 league matches after the restart. Sterling has already set his sights on the 20-goal mark and with City playing Norwich in their final league outing, Sterling could get there.

(The above story first appeared on LatestLY on Jul 22, 2020 11:15 PM IST. For more news and updates on politics, world, sports, entertainment and lifestyle, log on to our website latestly.com).