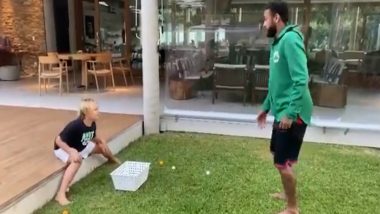 Neymar Jr left his son shell shocked after he played an egg prank with his son Davi Lucca, and the little one did not know how to react after his father pulled off the hilarious act. With the lockdown imposed in France, the people are forced to stay confined in their houses. This obviously includes the footballers too. Now Neymar Jr like everyone else is also locked up in the four walls of his house and played a hilarious prank on his son and shared it online for his followers to have a hearty laugh. Neymar Latest Transfer News Update: Former Barcelona President Calls Brazilian Second-Best Player After Lionel Messi, Urges Club to Bring Him Back.

So here’s what happened. In the clip we see, the PSG footballer throwing ping pong balls at his son. The eight-year-old then aims for the basket which is placed right in front of him. After throwing six balls, the PSG striker swapped the ball with an egg which obviously cracked on David’s head. The eight-year-old was shell shocked as his father played this prank. Neymar shared the video with the caption, “Trolling day with son.” Check out the funny video below:

Talking about Neymar, for a long time now has been touted to join Lionel Messi at Barcelona. In fact, former Barcelona president Sandro Rosell even labelled the Brazilian as the second-best player of course after Messi. He even urged the Catalan Giants to bring the Brazilian striker back to the squad.

(The above story first appeared on LatestLY on May 29, 2020 04:27 PM IST. For more news and updates on politics, world, sports, entertainment and lifestyle, log on to our website latestly.com).