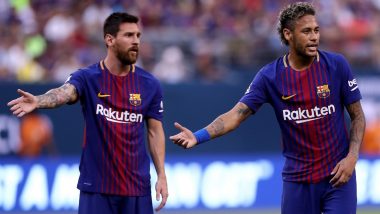 Former Barcelona president Sandro Rosell called Neymar the world’s second-best player after Lionel Messi and said if he were still the president at Camp Nou he would have tried to sign the mercurial Brazilian as he is the best player after Messi and easily fits into philosophy at the Catalan club. Neymar left Barcelona for Paris Saint-Germain in a world record €222 million transfer in 2017 but has been heavily linked toward a return to Camp Nou just three years after his departure. Neymar Jr Shares Workout Drills With Fans to Keep Fit at Home During Lockdown (Watch Video).

Neymar had publicly expressed his interest to join Barcelona last summer and even made an attempt into forcing PSG to sell him to Barcelona by boycotting the club training. But despite his urges, the 28-year-old failed to make a return to the La Liga side last season but is once again a transfer target for the Spanish heavyweights. It was Rosell, who had signed Neymar at Barcelona from Brazilian side Santos in 2013 and said that he would do the same if he helmed the chair at Camp Nou. Lionel Messi Can Fit Into Xavi’s Role at Barcelona When Approaching Career End, Says Pep Guardiola’s Former Assistant.

"If I were the president of Barca, I would try to sign Neymar," Rosell was quoted by Goal as saying to COPE and Radio Marca. "He is the second-best player in the world after Messi and fits perfectly into the philosophy of the club. But with experience, he would sign him with two contracts, one sports and the other behavioural."

Neymar was tipped by many as the true heir to Messi’s throne at Barcelona before he left for PSG, where he, in three seasons, has lifted three Ligue 1 titles in addition to one Coupe de France, Coupe de la Ligue and a Trophee des Champions trophy each. But the Brazilian has failed to dominate Europe in his time at PSG like he did at Barcelona where he won the Champions League in 2014 and was also the catalyst in their famous 6-1 comeback win against his current side.

He was in good form and had scored 13 times before Ligue 1 2019-20 was suspended due to the coronavirus pandemic. The remaining of the season was later cancelled by Franch Football Association and PSG eventually declared champions.

Rosell also had his say on the Lautaro Martinez transfer issue. The 22-year-old Argentine striker is the club’s prime target this summer. But despite repeated attempts, Barcelona have failed to steal him away from Inter Milan, who have asked the La Liga side to pay Martinez’s release clause of €111m in full if they are to take him. Rosell said he believes that Barcelona shouldn’t pay such a high amount for the striker but rather try and involve him in a player exchange deal.

"I would not sign Lautaro for €111 million but I would try to exchange two players," Rosell said instead advising the club to add two players to the deal and make it cash plus player-swap deal. Barcelona currently lead La Liga by two points ahead of Real Madrid and will want to keep it that way when the season resumes on June 8.

(The above story first appeared on LatestLY on May 29, 2020 01:18 PM IST. For more news and updates on politics, world, sports, entertainment and lifestyle, log on to our website latestly.com).