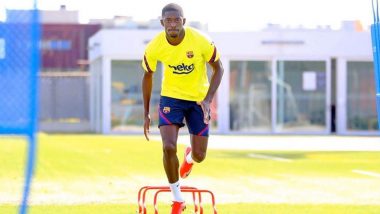 Barcelona star Ousmane Dembele has returned to Barcelona training for the first time in six months. The 23-year-old winger last player for the club in November 2019 against Borussia Dortmund where he picked up a muscle injury and then later suffered a set-back in February when he was close to a first-team comeback. But the Frenchman is now back and looks to have fully recovered from his injury. Lionel Messi, Quique Setien and La Masia: Barcelona President Josep Maria Bartomeu Optimistic About Club's Future.

Barcelona resumed their training in Tuesday following a few days off after a demanding La Liga season where the Blaugrana’s were unable to defend their league title. However, the team will now shift their focus to the Champions League campaign as they take on Napoli in the Round of 16 second-leg which will be played in August. Barcelona Reacts After Real Madrid Win La Liga 2019-20 Title, Check Tweet.

Due to Ousmane Dembele injury, Barcelona signed Martin Braithwaite from Leganes in February as his replacement. Although the Danish international will not play in the Champions League as he was only eligible to play in La Liga as he was signed after the closing of the winter transfer window.

However, with Dembele back in training, Barcelona will be hoping that the Frenchman could help them lift their sixth Champions League crown. Barcelona take on Napoli in the first fixture but are highly unlikely to risk the 23-year-old given his just recent recovery from a long injury but could use him in the latter fixtures if they make it through.

Antoine Griezmann and Clement Lenglet also returned to training on Tuesday after their respective injuries and are expected to be fit for the Champions League clash, Griezmann scored the equaliser in Naples for Barcelona as the reverse leg ended 1-1.

(The above story first appeared on LatestLY on Jul 29, 2020 09:28 AM IST. For more news and updates on politics, world, sports, entertainment and lifestyle, log on to our website latestly.com).