The World Cup-winner is headed to an exit from Manchester United and would be potentially moving abroad. Earlier, it was reported that he turned down Manchester City offer to join them at the end of this season on a free transfer. 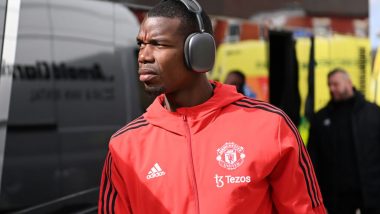 Paul Pogba, who had earlier turned down Manchester City, reportedly did so to avoid a major fan backlash from his current club Manchester United. The Frenchman is destined to be on his way out at Old Trafford as his contract expires at the end of the season and City was one of the destinations he was speculated to be headed to. But he had rejected the offer of joining the Premier League champions, preferring a move abroad instead.Robert Lewandowski Attends Phone Call in Bayern Munich Dressing Room, Mentions FC Barcelona in Front of Teammates: Report

The World Cup-winning midfielder felt that accepting City's offer could cause a massive fan backlash and make his life in Manchester very difficult. It was earlier reported that the Frenchman has agreed personal terms with City for a free transfer. But he decided against it eventually. Earlier, it was Carlos Tevez, who was criticised massively by Manchester United supporters after he left them to join Manchester City in 2009. Pogba did not want a similar thing to happen and hence, it is understandable why he did what he did.

According to several reports, a return to Juventus is on the cards for the Frenchman. Pogba had rejoined United from Juve back in 2016 but now, seems to be headed to Turin once again. A move to PSG has also been linked with him and it would be interesting to see where he ends up at the end of the summer transfer window.

(The above story first appeared on LatestLY on May 20, 2022 11:48 AM IST. For more news and updates on politics, world, sports, entertainment and lifestyle, log on to our website latestly.com).