The Poland captain and talismanic striker has announced he wants to leave Bayern Munich at the end of the season with a year remaining on his contract. He has also been heavily linked to moving to Camp Nou this summer. 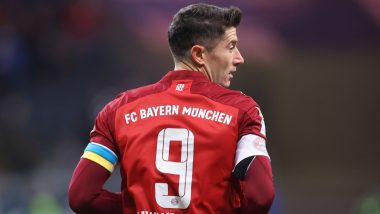 Robert Lewandowski has been heavily rumoured to be close to joining Barcelona after not choosing to renew his Bayern Munich contract. But speculations regarding this transfer move are likely to shoot up and increase even more after it came to light that the Polish striker was involved in a telephonic conversation in the Bayern Munich dressing room where he mentioned FC Barcelona.  Robert Lewandowski Transfer News: Chelsea Show Interest To Sign Bayern Munich Star

According to a report in SportBild, Lewandowski spoke in Polish throughout the call and the only word that could be understood was FC Barcelona. This surely does indicate that the star forward is headed towards Camp Nou after publicly stating his intention of leaving Bayern. The report further adds that Lewandowski took the call in front of his teammates. The Polish has had a good season where he has scored 35 goals in 34 appearances in the Bundesliga. His move to Barcelona would undoubtedly strengthen their attack.

Lewandowski's manager for his national team, Czeslaw Michniewicz wanted the striker to move to Barcelona. He said, as quoted by Mirror,  "In a conversation with me, he told me that there is a possibility he could leave. He is now at a big club like Bayern, but I would like him to be at Barcelona, it would be good to have a Pole there."

(The above story first appeared on LatestLY on May 19, 2022 10:21 AM IST. For more news and updates on politics, world, sports, entertainment and lifestyle, log on to our website latestly.com).