The Manchester United star has opened up on struggling with depression during his career and said, "Sometimes you don't know you are, you just want to isolate yourself, be alone, these are unmistakable signs." The midfielder looks set to become a free agent this summer. 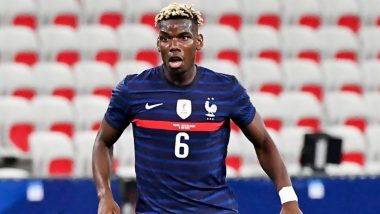 Paul Pogba revealed that he suffered from depression in his career so far. The French midfielder was criticized since rejoining Manchester United for a record  £89 million fee from Juventus back then opened up about his mental health issues and said that he wanted to isolate himself at times. In an interview with Le Figaro, Pogba, who is currently with the French national team, said, " I've had depression in my career, but we don't talk about it," Pogba said, adding, "Sometimes you don't know you are, you just want to isolate yourself, be alone, these are unmistakable signs." Pogba enjoyed a lot of success at Juventus before rejoining Manchester United in 2016. Paul Pogba Latest Victim of House Burglary in England, Manchester United Midfielder Reveals How His Family’s Security Was Compromised

His return to Manchester United has seen him come under the scanner with a lot of criticism for his performances. He also had a fallout with the then Manchester United manager Jose Mourinho and the two were even pictured having an argument during training. The midfielder, nonetheless, currently seems to be in a good space of mind with the national team.

Pogba also had revealed that there was a burglary at his house while he was away playing for Manchester United in the Champions League round of 16 clash against Atletico Madrid. The Red Devils were knocked out from the tournament and Pogba had taken to social media to reveal the details of the incident, which threatened his family's security. He revealed that his 2018 World Cup winners' medal was stolen along with his mother's jewellery. Pogba said, "I am ok, my family too. I had quite a surprising week, with the Champions League match where I learned that I am not going to play and, when I went home, I discovered that my home was robbed following the entry of three people who stole my safe. Happy Birthday Paul Pogba: Manchester United Wish French Midfielder on His Special Day (Check Post)

"There was my mother’s jewellery in there, my World Cup medal… What scared me the most, is that my two children were at home with the nanny during the incident. She heard everything, called my wife and security, then locked herself with the boys (aged 1 and 2) in a room. For several days after, she was in shock. The most important thing is that my children are doing fine," added the Frenchman.

Pogba is set to become a free agent this summer after reportedly not signing a new contract at Manchester United. Although it isn't made official yet, the 2018 World Cup-winning midfielder looks set to change clubs this summer, with many reports tipping him to return to Juventus.

(The above story first appeared on LatestLY on Mar 23, 2022 11:11 AM IST. For more news and updates on politics, world, sports, entertainment and lifestyle, log on to our website latestly.com).