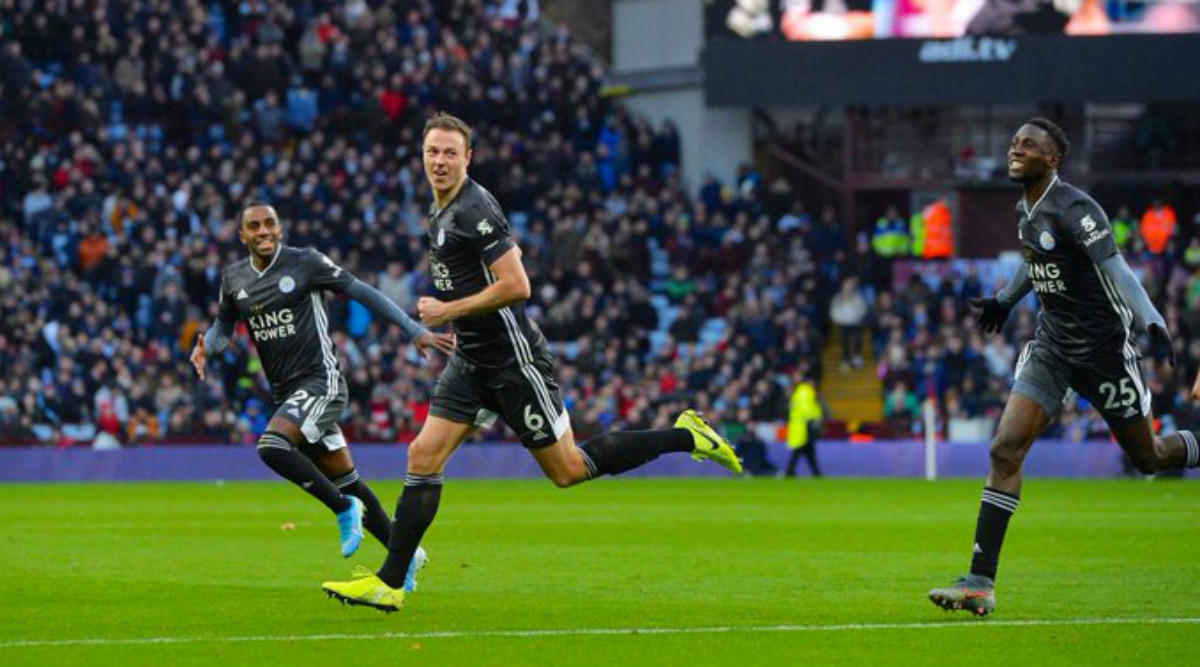 Brendan Rodgers' second-placed side moved within eight points of Liverpool thanks to goals from Vardy, Kelechi Iheanacho and Jonny Evans at Villa Park.

Jack Grealish had reduced the deficit to 2-1 late in the first half, but Leicester cruised to an eighth consecutive top-flight victory, setting a new club record that smashed the previous best from the 1962-63 season. Manchester City Fans Taunt Jesse Lingard and Fred With Racist Jibes During their Derby Match Against Manchester United (Watch Video).

Vardy has now scored in eight consecutive Premier League appearances and is the competition's top scorer with 16 goals this term.

The 32-year-old striker's blistering run has given him a chance of equalling his sequence of scoring in 11 successive matches during Leicester's 2015-16 title-winning campaign.

"I thought they were amazing, it is a historical day for the club and the performance warranted that," Rodgers said.

"It really does mean something special, it puts the team in the history books of Leicester City."

Leicester's surge up the table, after 12 wins from their last 14 league games, has made them unexpected title contenders again and leaves them in position to qualify for the Champions League.

Jurgen Klopp's men remain heavy title favourites and the acid test of Leicester's credentials will come with successive fixtures against Manchester City and Liverpool over Christmas.

"I don't think anyone expects us to be near the top. After Manchester United won at Manchester City on Saturday, the caption came up about how far City are away from Liverpool," Rodgers said.

"We respect that, we get on with our work and keep developing as a team. We look like a top team."

Vardy maintained his superb form to put Leicester ahead in the 21st minute.

Latching onto a fine pass from Iheanacho and, with the injured Tyrone Mings unable to sprint back, Vardy had space to round Tom Heaton before stumbling over the ball.

Quickly recovering his footing, the striker glided past Ezri Konsa to slot home from inside the six-yard box.

James Maddison surged into the Villa area and delivered a fine cross that Iheanacho turned in from close range.

Grealish gave Dean Smith's side a lifeline in first half stoppage-time.

But Evans restored Leicester's two-goal advantage in the 49th minute when the defender met Maddison's corner with a towering header for his first goal since February.

Vardy put the result beyond doubt in the 75th minute with another clinical finish.

Newcastle fought back to make it two consecutive wins with a 2-1 success against Southampton.

Danny Ings gave Southampton a 52nd-minute lead at St James' Park, but Newcastle were level in the 68th minute through Jonjo Shelvey.

Sheffield United manager Chris Wilder claimed VAR does referees a disservice after his side came from behind to seal a 2-1 victory over Norwich at Carrow Road.

The game had moments of VAR controversy, with a red card for United's Chris Basham overruled and a lengthy delay eventually denying the Blades a third goal.

"The percentages that we're looking at I don't think are making the game a better game to be involved in at the moment," Wilder said.

"We're doing a disservice to the elite referees as well. That's putting doubt in their mind as well."

Wolves moved into sixth place after Diogo Jota rescued a 2-2 draw at Brighton.

Wolves opened the scoring through Jota in the 28th minute, only for Neal Maupay to blast Brighton level six minutes later.

Davy Propper headed Brighton into the lead in the 36th minute before Jota equalised seconds before half-time.