The Parisians, already having bagged the title, would now look forward to ending this season on a high. But Troyes are in form, having beaten Lille 3-0 in their last match. 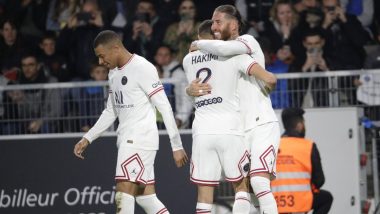 PSG are set to go up against Troyes in a Ligue 1 2021-22 clash on Monday, May 9. The match would be played at the Parc des Princes and is scheduled to begin at 12:15 am IST (Indian Standard Time). Already having won the title, PSG are aiming to have a good finish to the season and for that, all three points would be their target for this game. The Parisians promised to achieve much more this season, especially after assembling a really strong team. But as European glory remains elusive to them, they have managed to clinch their 10th La Liga title. But they have not won in two Ligue 1 games now and would be aiming to return to winning ways. Kylian Mbappe Transfer News: PSG Star's Mother Rubbishes Contract Extension Rumours Amid Real Madrid Interest

Troyes on the other hand, are 15th on the points table and a win in this game would take them up by one spot. They are entering this game on the back of a 3-0 win over former champions Lille, which would definitely give them a world of confidence. Let us take a look at the live streaming and telecast details of the game.

The PSG v Troyes match in Ligue 1 will be played at the Parc des Princes in Paris on May 9, (Monday). The league clash has a scheduled start time of 12:15 am IST (Indian Standard Time).

Fans in India can watch the PSG v Troyes match live on their television sets through Viacom18 channels as they are the official broadcasters of Ligue 1 2021-22 matches in India. VH1 is likely to telecast the game on TV.

Football fans in India can also live stream the PSG v Troyes Ligue 1 2021-22 match on the Voot app and website. JioTV would also provide live streaming of this match in India.

(The above story first appeared on LatestLY on May 08, 2022 09:15 PM IST. For more news and updates on politics, world, sports, entertainment and lifestyle, log on to our website latestly.com).