Chelsea have agreed a personal deal with their long-time target Raheem Sterling. It is understood that Manchester City would ask around $50 million for the forward to finalize the deal. 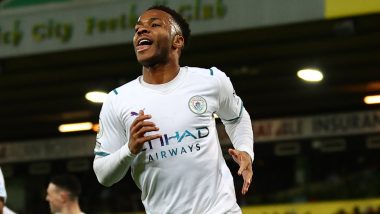 Chelsea have agreed personal terms with Raheem Sterling for a summer transfer move and are on course of finalizing the deal with Manchester City in one or two days, according to Fabrizio Romano. With the Blues constantly linked with the English player over the last few weeks, it was a matter of time both the parties agreed to come to a conclusion. Both Chelsea and Man City are now discussing about the transfer fee to put an end to it and complete the move. Raheem Sterling Transfer News: Chelsea Close to Signing Manchester City Attacker

The 27-year-old winger netted 16 goals and recorded 9 assists in the last season for the Premier League champions. He also scored 7 times for his country in the international stage throughout the last season. After going through an overwhelming season, Sterling is no longer untouchable at Etihad as the likes of Erling Haaland and Julian Alvarez have joined Pep Guardiola's squad. Chelsea coach Thomas Tuchel is an admirer of the English forward and wanted him to join the Blues a lot.

Chelsea and City, set to agree final fee around £45m and then it will be completed. pic.twitter.com/he08wImBKH

However, after the player and Chelsea both have agreed to a contract, it is just a matter of time City would reach to a acceptable deal with the Blues. According to Fabrizio Romano, the fee of the transfer would be around $50 million. It remains to be seen how Raheem Sterling is used at Stamford Bridge by Tuchel alongside Timo Werner, Kai Havertz and Christian Pulisic, with a potential Cristiano Ronaldo arrival looming.

(The above story first appeared on LatestLY on Jul 07, 2022 02:56 PM IST. For more news and updates on politics, world, sports, entertainment and lifestyle, log on to our website latestly.com).