The Blues are expected to make Sterling their first big signing of the summer window. Chelsea have also linked to players like Jules Kounde, Matthijs de Ligt, Nathan Ake and also Neymar. 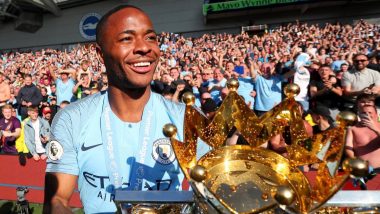 Chelsea are reportedly closing in on a deal to sign Raheem Sterling from Manchester City. The winger has been a target for the Blues this summer and could become their first of many big signings of the transfer window. Thomas Tuchel's men expect an overhaul in the squad with the new ownership at the club and the winds of change have already started with last summer's signing Romelu Lukaku heading back to Inter following an underwhelming campaign.Richarlison Transfer News: Brazilian Forward Joins Tottenham Hotspur

According to football.london, Sterling's move to Chelsea is an imminent one. The England forward has a year left on his Manchester City and the Premier League champions would aim to cash in on the player, instead of losing him for free next summer. Pep Guardiola's side have had some attackers joining the side, with the signings of Erling Haaland and Julian Alvarez.

Chelsea have also been linked with the likes of Jules Kounde, Matthijs de Ligt, Nathan Ake and even Neymar, who is reportedly pondering his exit from PSG. One can expect a lot of incomings this summer at Chelsea with the club's new ownership taking over affairs at Stamford Bridge.

(The above story first appeared on LatestLY on Jul 01, 2022 08:17 PM IST. For more news and updates on politics, world, sports, entertainment and lifestyle, log on to our website latestly.com).