Premier League referee Mike Dean has reported receiving death threats to the police after being targeted through his family's social media accounts. The menacing messages were received after Dean sent off West Ham's Tomáš Soucek in Saturday's game against Fulham. The red card was overturned on appeal on Monday 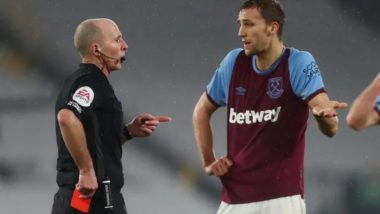 Premier League referee Mike Dean has reported receiving death threats to the police after being targeted through his family's social media accounts.

The menacing messages were received after Dean sent off West Ham's Tomáš Soucek in Saturday's game against Fulham. The red card was overturned on appeal on Monday, just like the one shown to Southampton's Jan Bednarek at Manchester United on Tuesday. Post this, Mike Dean will be missing out on upcoming Premier League games. EPL 2020-21 Telecast in China: Premier League Seeking Broadcast Solutions for Chinese Fans.

Having two of his decisions so publicly judged to be wrong by the Football Association has increased the spotlight on Dean. But the scrutiny has moved into a troubling territory for the Professional Game Match Officials Board and Dean has decided to take a break from this weekend's round of matches.

“Threats and abuse of this nature are totally unacceptable and we fully support Mike's decision to report these messages his family received to the police," said Mike Riley, a former Premier League referee who is general manager of England's refereeing body.

"Nobody should be a victim of abhorrent messages like this. Online abuse is unacceptable in any walk of life and more needs to be done to tackle the problem.” Dean was threatened online after dismissing Soucek in stoppage time of West Ham's 0-0 draw with Fulham for catching Aleksandar Mitrovic with his elbow. Dean watched replays repeatedly in slow motion on a pitchside monitor at Craven Cottage after consulting the video assistant referee, Lee Mason. West Ham manager David Moyes said after the game he was “quite embarrassed for Mike that he would have made that decision” and the FA decided ultimately that the club's appeal was legitimate.

“I am disappointed with football in general that the officials would allow these situations to take over from the game,” West Ham manager Moyes said on Monday. “I can only see the officials being the people that can stop it by not allowing the players to get away with the actions they are taking, because it is making the referee's decision so difficult in giving them a decision when there wasn't one to give.” Dean had also consulted replays by the pitch at Old Trafford being sending off Bednarek for a challenge on Anthony Martial in Southampton's 9-0 loss at United. An appeal to the FA by Southampton led to that decision being rescinded.