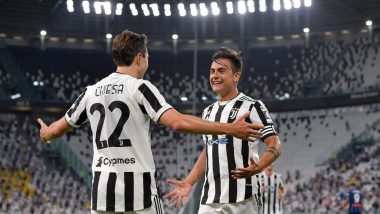 The final list of the Round of 16, UEFA Champions League 2021-22 is finally here. The last match of the Group stage was held last night where the teams like Manchester City, Manchester United, Juventus have made it to the next round already. Barcelona faced a shocking exit from the Champions League 2021-22 after they lost 3-0 to Bayern Munich. This is the first time since 2000 that the team will play in the Europa League. Instead of Barcelona, it was Benfica who made it to the knockouts. Barcelona Crashes Out of UCL 2021-22 After Losing 3-0 to Bayern Munich.

Talking about the results on Wednesday night, we had Manchester United being held 1-1 by the Young Boys at the Old Trafford. Juventus won 1-0 against Malmo as Moise Kean scored an early goal to seal a win. Man United and Juventus had already qualified for the Champions League 2021-22. Salzburg also made it to the top 16. Here's the full list of teams that made it to the knockouts.

With that here's a look at the teams:

The Champions League 2021-22 draws will take place on December 13, 2021. The rules are simple that the Group Winners cannot take on the runners-up. Stay tuned to this space for more updates on the match.

(The above story first appeared on LatestLY on Dec 09, 2021 12:50 PM IST. For more news and updates on politics, world, sports, entertainment and lifestyle, log on to our website latestly.com).