The former Manchester United star had started all of Portugal's matches at FIFA World Cup 2022 but was relegated to the bench during their round of 16 victory over Switzerland. Continue reading to find out whether he will play tonight when Portugal clash with Morocco for a spot in the FIFA World Cup 2022 semifinal. 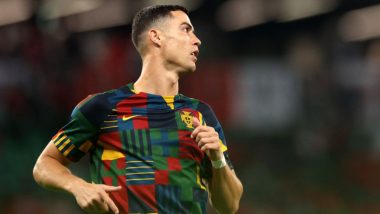 Cristiano Ronaldo would be hoping to keep alive his hope of winning the FIFA World Cup when his Portugal side take on Morocco in the quarterfinal. Portugal have been dominant so far in the competition and barring a defeat to South Korea and some jarry moments against Ghana in their campaign opener, the former European champions have produced some top performances in four matches so far. However, they would be up against a resilient outfit in Morocco, who have surprised one and all with their performances. The African nation also knocked out Spain in the last 16 to make it to the last eight. Portugal start as favourites but Morocco’s chances cannot be ruled out. So will Cristiano Ronaldo play tonight in the Morocco vs Portugal, FIFA World Cup 2022 Quarterfinal match? Lionel Messi Goal Video Highlights: Watch Lionel Messi Convert A Spotkick Against Netherlands in FIFA World Cup 2022 Quarterfinal

The former Manchester United star was benched in Portugal’s last 16 match against Switzerland and Ronaldo’s replacement, Goncalo Ramos, who started in place of the star, netted a hattrick to propel his side to the win. The crowd at the Lusail Stadium cheered Ronaldo’s name when he was introduced later on and he was also able to find the back of the net, but it was ruled out for being offside.

The forward had started all of Portugal’s matches in the group stage of the competition but was used as a substitute in their win over Switzerland in the round of 16. There had emerged reports of him threatening to leave the Portugal camp but the rumours were dismissed later on. With Ramos netting a hattrick in his first start for the side, it would be hard for head coach Fernando Santos to leave him out of the starting XI for this game. Neymar Breaks Down After Brazil’s Shock Elimination From FIFA World Cup 2022 With Quarterfinal Defeat to Croatia (Watch Video)

Ronaldo thus, is likely to start from the bench and be used as a substitute later in the match. However, given the magnitude of the clash and Morocco’s defense, Ronaldo’s experience would be very crucial and thus, the possibility of Santos reinstating the player to the starting XI cannot be ruled out completely.

Ronaldo has managed to score one goal in the competition so far, which came from the penalty spot during Portugal FIFA World Cup 2022 campaign opener against Ghana.

(The above story first appeared on LatestLY on Dec 10, 2022 09:11 AM IST. For more news and updates on politics, world, sports, entertainment and lifestyle, log on to our website latestly.com).