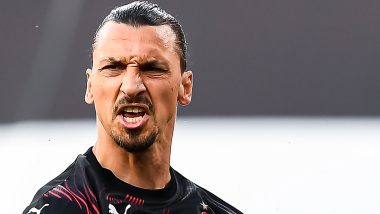 Zlatan Ibrahimovic was once again on target for AC Milan as the Swedish striker scored a brace in the victory over Sampdoria on Wednesday (July 29, 2020). The Rossoneri ran out 4-1 winners on the night confirming a sixth-place finish in the Serie A 2019-20 season. Rafael Leao and Hakan Chalanouglu were also the scoresheet as Stefano Pioli’s men extended their unbeaten run to 11 games post lockdown. Zlatan Ibrahimovic Models for AC Milan’s Next Season Kit Amid His Uncertain Future in Italy.

Zlatan Ibrahimovic returned to AC Milan in January after his contract with LA Galaxy expired and since his return has been a driving force behind the Rossoneri’s. Since the 38-year-old’s arrival, Stefano Pioli’s men have been a completely different side and have confirmed their qualification for Europa League next season, an objective which looked out of reach last year. AC Milan Reportedly Opens Door For Renewing Zlatan Ibrahimovic's Contract.

On Wednesday, Zlatan continued his scoring run taking his tally in the Italian league to nine goals for the season. The 38-year-old opened the scoring against Sampdoria in the fourth minute and got his second of the game just before the hour mark. Rafael Leao and Hakan Chalanouglu scored on either side of the Swede’s second strike.

With his brace, Zlatan Ibrahimovic netted his 50th goal for AC Milan, thus becoming the only player to reach a half-century of goals for both Milan clubs (AC Milan and Inter Milan). The Swedish striker played in the Red and Black of the Rossoneri from 2010 to 2012 and returned in 2020. While he donned the Blue of Inter from 2006 to 2009.

Now the 38-year-old striker will be looking to take his Serie A tally for the season into double figures when AC Milan face Cagliari in their final league game. However, the Islanders will be in good form as they defeated Juventus in their penultimate game.

(The above story first appeared on LatestLY on Jul 30, 2020 01:21 PM IST. For more news and updates on politics, world, sports, entertainment and lifestyle, log on to our website latestly.com).