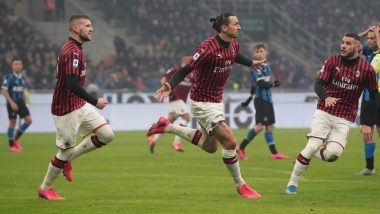 Zlatan Ibrahimovic’s stint with AC Milan is nearing an end in July. However, as per a few reports which have emerged online, AC Milan could be renewing their contract with Zlatan Ibrahimovic. AC Milan has displayed a different side altogether ever since the restart of the Serie A 2019-20. From beating Italian giants Juventus 4-2 to winning comprehensively against Bologna. The team has remained unbeaten since the restart of Serie A 2019-20. CEO Ivan Gazidis has also said during an interview that Zlatan has given them a great hand and has helped a lot of younger players.  Zlatan Ibrahimovic Spotted on a Dinner Date With Serie A Presenter Diletta Leotta, Sets the Tongues Wagging.

He further said that the decision about the same would be made together. During an interview, he said, “I can’t say if Ibra now has more chance of staying. He gave us a great hand since he came. He has put passion, instinct, talent in it. He has helped the younger players. A phenomenal player. We will decide together.” However, as reported by Sky Italia, the club has opened the idea of negotiating with him and will soon meet the former Manchester United striker with a renewed offer.

Zlatan has been in a terrific form and has challenged the age factor very effectively. The former Manchester United striker had scored a couple of goals against Sassuolo and the team won the match by 1-2. Leeds is also targetting the former Manchester United striker for now. It would be interesting to see if Zlatan still stays back at the club or dons the jersey of another club.

(The above story first appeared on LatestLY on Jul 24, 2020 11:20 AM IST. For more news and updates on politics, world, sports, entertainment and lifestyle, log on to our website latestly.com).