A nine-member Women’s Recurve Team comprising of Indian Archers DeepikaKumari, Komalika Bari, Ankita Bhakat and MadhuWedwan along with Dronacharya Awardee Purnima Mahato have set off for Paris to participate in the Final Qualification Tournament for the Tokyo Olympic Games. 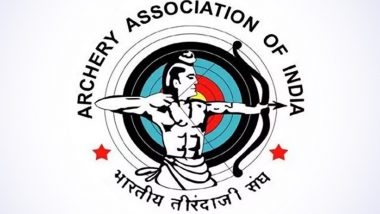 A nine-member Women’s Recurve Team comprising of Indian Archers DeepikaKumari, Komalika Bari, Ankita Bhakat and MadhuWedwan along with Dronacharya Awardee Purnima Mahato have set off for Paris to participate in the Final Qualification Tournament for the Tokyo Olympic Games to be held in Paris from 17th-19th June, 2021 and the World Cup Stage 3 from 20th-28 June, 2021. Indian Olympic Association to Boycott Chinese Sponsors, Athletes to Wear Unbranded Apparel for Tokyo Olympics 2020.

NTPC Ltd, India’s largest integrated power company, has partnered with Archery Association of India (AAI) for holistic development of archery across India and to further promote Indian archery on the global platform. Through this partnership, NTPC aims to provide a platform to Indian youth to showcase their talent and elevate India’s reputation in the field of Archery.

Shri Dillip Kumar Patel, Director (HR) NTPC, has extended warm wishes to the Indian Archery team. NTPC has been exemplary in not only helping the archers achieve excellence but also helping to nurture and promote newer talents for a brighter future especially during these challenging times.

The Men’s Recurve team comprising ace archers Atanu Das, Tarundeep Rai and Pravin Ramesh Jadhav who have brought home the Team Silver medal after an excellent performance in the World Championship in Netherlands are also set to depart for Paris to take part in the World Cup Stage-3.

In the recent past, Indian Archers DeepikaKumari, Atanu Das, AnkitaBhakat and Komalika Bari had put up a stellar performance during the Archery World Cup (Stage-I) at Guatemala. In Women’s and Men’s Individual Recurve event, DeepikaKumari and Atanu Das won the Gold Medal in their respective categories.

While energizing India’s growth story, NTPC is steadily working towards being a sustainable energy company. Apart from lending support to India’s growth, NTPC has also been a pillar of support for holistic development for its communities and society at large. NTPC has supported the development of sports in India and the step towards sponsoring the Archery Association of India is one of the milestones in the long cherished journey.

(The above story first appeared on LatestLY on Jun 09, 2021 05:35 PM IST. For more news and updates on politics, world, sports, entertainment and lifestyle, log on to our website latestly.com).