Bengal Warriors defeated Dabang Delhi in the final of VIVO Pro Kabaddi League (PKL), 2019 which was played on Oct 19, 2019, at EKA Arena by TransStadia in Ahmedabad. Bengal won their maiden PKL 2019 Trophy by defeating Dabang Delhi by 34-39. 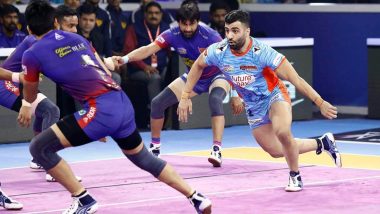 Bengal Warriors defeated Dabang Delhi in the final of VIVO Pro Kabaddi League (PKL), 2019 which was played on Oct 19, 2019, at EKA Arena by TransStadia in Ahmedabad. Bengal won their maiden PKL 2019 Trophy by defeating Dabang Delhi by 34-39. Dabang Delhi played under the captaincy of Ravinder Pahal, while Bengal Warriors played without their leader Maninder Singh and was led Mohammad Nabibakhsh. Meanwhile, let us have a look at some of the picture and video from the DEL vs BEN PKL Season 7 Final which is worth watching along with match report. DEL vs BEN PKL 2019 Final Match Results: Twitterati Lauds Bengal Warriors On Winning Their Maiden Pro Kabaddi League Title.

Bengal Warriors did not have a great start as they faced the first all-out from Dabang Delhi. However, Mohammad Nabibakhsh changed the course of the match by bringing a turn around in the first-half which bought Bengal side back in the game. Bengal Warriors with their second all-out attempt managed to end the 1st half with 17-17 score. In the second half, we saw some brilliant action from Jeeva Kumar and Naveen Kumar, where the former did well in the defence to get 4 points tackled. Naveen Kumar who has been outstanding throughout the season again bagged raider of the match award, however, his last attempt went empty as Delhi side fell short by 5 points.

Bengal Team Did it This Time

Bengal Warriors With Their Coach

The moment we were all waiting for! https://t.co/KbCJOdT8pp

Bengal Warriors defeated U Mumba in the semi-final 2 by 37-35, while Dabang Delhi reached final by defeating the defending champion Bengaluru Bulls. Naveen Kumar bagged the raider of the season award while the defender of the season was bagged by U Mumba's Fazel Atrachali.

(The above story first appeared on LatestLY on Oct 19, 2019 10:30 PM IST. For more news and updates on politics, world, sports, entertainment and lifestyle, log on to our website latestly.com).