Bengal Warriors defeated Dabang Delhi in the final of VIVO Pro Kabaddi League (PKL) 2019 to win their maiden PKL trophy. The match took place at EKA Arena by TransStadia in Ahmedabad. Dabang Delhi was led by Ravinder Pahal, while Bengal this time again played without their star player Maninder Singh. 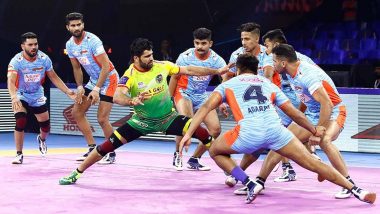 It was a nail-biting match and a perfect end to Pro Kabaddi League Season 7. In the first half, the score was 17-17 by both teams where Bengal Warriors came back in the game by an all-out. Delhi had a good start as they began with 7-0 lead.  Delhi player Naveen Kumar also achieved 300 raid points in the final game. After the half time, the viewers did not move from their seat as the match was so much tensed with the pendulum swinging in favour of both teams at every other instant. In the final raid, Naven Kumar couldn't do much for his team as it went empty with Delhi falling short of 5 points.

Feeling sad for one and only one @naveenkumar in final of @ProKabaddi match you are greatest kabaddi player of this season but congratulations to @BengalWarriors 💐💐💐💐💐 pic.twitter.com/vbpaCpYq3H

Bengal Warriors Has Reached Its Destination Without Its Captain

A ship without his captain has successfully reached it's destination. Congratulations Bengal warriors you deserve it. 💐

And they continue to surprise one and all. PKL 7 champions, Bengal Warriors, everyone! pic.twitter.com/3YwhH7j0XP

Bengal Warriors Coach Played a Big Role In Their Victory

Credit where it's due, BC Ramesh is one of the best coaches in the Indian Kabaddi circuit.

Naveen Kumar was awarded the Perfect Raider of the match, while Bengal's Jeeva Kumar bagged Defender of the match title in PKL 2019 final. Dream11 game-changer of the match was given to Mohammad Nabibakhsh. Bengaluru Bulls were the winner of PKL 2018 title and now Bengal Warriors has become the new champion.

(The above story first appeared on LatestLY on Oct 19, 2019 09:36 PM IST. For more news and updates on politics, world, sports, entertainment and lifestyle, log on to our website latestly.com).