Team India wicketkeeper-batter Rishabh Pant broke into the top-5 of the ICC Test ranking for the first time after scoring a century and fifty in the rescheduled fifth Test at Edgbaston, while star batter Virat Kohli dropped three places to 13th after a string of poor performances. 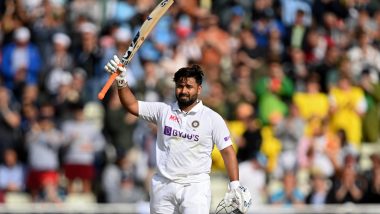 London, July 6: Team India wicketkeeper-batter Rishabh Pant broke into the top-5 of the ICC Test ranking for the first time after scoring a century and fifty in the rescheduled fifth Test at Edgbaston, while star batter Virat Kohli dropped three places to 13th after a string of poor performances. Wicketkeeper-batter Pant put India on top early in the Test against England with 146 runs off just 111 balls in the first innings then followed up with 57 later in the match. Pant's recent form with two tons and three half-centuries in his past six Test innings has earned him a highest-ever position in the Test batting rankings, moving six places to fifth. Virat Kohli, Jasprit Bumrah Likely To Be Rested for India’s Tour of West Indies: Sources.

Virat Kohli, who only managed scores of 11 and 20 against England in rescheduled Edgbaston Test and slipped out of the top-10 in the ICC men's Test player rankings. Bairstow helped guide England to a stunning fourth-innings triumph over India with an unbeaten 114, and now climbs 11 places to tenth in the Test batting rankings. The 32-year-old is arguably in the finest form of his career with four tons in his past three Tests, including dual centuries in the rescheduled Test against India after reaching three-figures in consecutive matches against New Zealand.

Bairstow has 1218 runs at an average of 55.36 with six centuries in the current ICC World Test Championship cycle. Bairstow's stunning rise reflects in the rankings - ahead of the New Zealand series, the Yorkshireman was 47th in batters' ranking with 541 rating points. Four matches and four centuries later, he has broken into the top 10 for the first time since 2018. Joe Root continues to hail supreme at the top of the rankings and an unbeaten century (142 not out) in England's record chase at Edgbaston sees him attain his highest rating points (923). Virat Kohli Slammed on Social Media for His ‘Embarrassing’ and ‘Pathetic' On-Field Celebrations Against England.

It also puts the former England captain in the elite list of top 20 highest-rated batters in ICC Rankings history. James Anderson played his part to keep England in the contest in the recent Test against India with a five for in the first innings and now has 17 wickets in three Tests since his recall. The resurgent pace bowler climbs one spot to sixth in the Test bowling rankings. Nathan Lyon has been rewarded for taking nine wickets in the first Test against Sri Lanka with a rise of five spots to 13th. There has been no change to the top 10 of the Test all-rounder rankings but Australia's Cameron Green moves closer to breaking into it for the first time after jumping three spots to 14th.

Akeal Hosein has surged 10 places and into the top 10 of the T20I bowling rankings after his economical efforts against Bangladesh ended with figures of 22/1 and 27/1. The left-arm orthodox spinner is now equal-eight with Sri Lanka's Maheesh Theekshana. Papua New Guinea's Norman Vanua jumped 10 places to ninth in the T20I all-rounder rankings following his 91 runs and three wickets in two matches. There has been no movement at the top end of the T20I batting rankings.

(The above story first appeared on LatestLY on Jul 06, 2022 03:51 PM IST. For more news and updates on politics, world, sports, entertainment and lifestyle, log on to our website latestly.com).