Former India skipper Virat Kohli's aggression and "embarrassing" celebrations on the cricket field have not gone down well with several of his fans and critics, who have made their displeasure known by taking to social media to criticise one of India's most success Test captains. 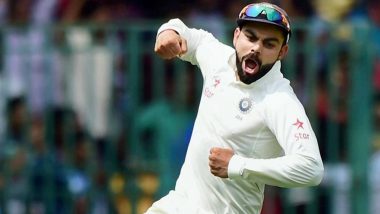 Edgbaston, July 6: Former India skipper Virat Kohli's aggression and "embarrassing" celebrations on the cricket field have not gone down well with several of his fans and critics, who have made their displeasure known by taking to social media to criticise one of India's most success Test captains. While England middle-order batter Jonny Bairstow may have dismissed his angry exchanges with Kohli on Day 3 of the rescheduled fifth Test at Edgbaston by saying it was part and parcel of the game, given the fiercely competitive nature of the sport, it did leave several cricket pundits unhappy with the Indian stalwart's gestures. IND vs ENG Dream11 Team Prediction: Tips To Pick Best Fantasy Playing XI for India vs England 1st T20I 2022 in Southampton.

As Bairstow walked off after scoring a fighting 106 in the first innings, cameras caught Kohli blowing him a kiss. Earlier, on a truncated day two of the Test when Bairstow was off to an slow start in bowler-friendly conditions, Kohli was heard saying, "A bit faster than Southee, eh?" As Kohli kept chirping from the slip cordon, he attracted Bairstow's attention and thus began the exchange of words between the two. In between, Kohli was seen putting his finger on his mouth and gesturing Bairstow to get back to batting, with words like "shut up, just stand and bat" coming in the 33rd over. The umpires had to come in to separate the duo as England skipper Ben Stokes saw all of this from the non-striker's end.

English broadcaster and television personality Piers Morgan took to social media and posted an image of Kohli blowing a kiss towards Bairstow as the England batter made his way to the dressing room. "Kohli has a brass neck blowing mocking kisses at a bloke who's scored three more Test hundreds in the past month than he has in the past 2.5 years," tweeted Morgan. Another critic was even more uncharitable, saying, "Few players more insufferable in test cricket than Virat Kohli. Blowing kisses at Bairstow who's scored more centuries today than Kohli has in about three years. Focus on your own game. #ENGvsIND." IND vs ENG 5th Test: Twitterati Reacts to India’s Embarassing Defeat at Edgbaston.

Another cricket broadcaster Fabian Cowdrey tweeted, "No idea why #Kohli has to act the way he does. He's a world class player, but blowing kisses to Bairstow on his way off... Seriously? #ENGvIND." Another fan felt Kohli's celebrations were "pathetic". "Virat Kohli's celebration there is embarrassing and pathetic. I'd be having a word personally, don't like it. It's excessive and over the top for no reason #ENGvIND," while a fan opined that the India cricketer should have been warned by the cricket bodies now. "Kohli should have been warned by now. Running up to the batsman to celebrate in their face. A great player, but someone who you just can't respect when he shows absolutely none to anyone else," he said.

(The above story first appeared on LatestLY on Jul 06, 2022 11:18 AM IST. For more news and updates on politics, world, sports, entertainment and lifestyle, log on to our website latestly.com).