Manu Bhaker Opens Up About Fall-Out With Jaspal Rana After Exit from Tokyo Olympics 2020, Says ‘His Attitude Towards me was Not Good at all’

Manu Bhaker had been one of the top contenders for a medal from the shooting contingent for India at the Tokyo Olympics 2020. But things didn't pan out Manu's way but off the field controversies with Jaspal Rana also grabbed headlines. The ace shooter opens up about the controversy with the coach in an interview. 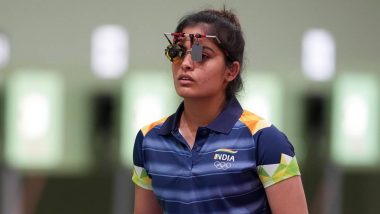 Manu Bhaker had been one of the top contenders for a medal from the shooting contingent for India at the Tokyo Olympics 2020. But things didn't pan out Manu's way but off the field controversies with Jaspal Rana also grabbed headlines. Finally, Manu opens up about her fall out with coach Rana who was spotted with a white t-shirt and that too with the shooter's message to him imprinted on his outfit. The teenage shooter clarified that she did not message him as she had been off social media for about four-five months now.  She also stated that Rana's attitude was not at all good towards her and the shooter was in a bad mental space due to this fall-out. Manu Bhaker’s Coach Ronak Pandit Slams Gun Manufacturer Morini, Blames Them for Planting Anti-Manu Stories in the Media.

While speaking specifically about Rana, the shooter exclaimed, "I have a lot of negativity in my life and shooting career as well, personal life and my family as well, 3 or 4 months back. It was very negative and depressing also but now I feel positive and happy about everything." The shooter also clarified that the federation took the decision of expelling him. Manu further opined that the people she trusted have let her down the most.

According to Manu had her current coach Ronak Pandit joined her earlier, it would have benefitted her. While speaking about the personal message to Jaspal Rana she said that it was her mother who could have messaged her former coach. "My mother must have written it, she is a very emotional person. She saw the hurt me during the World Cup, he was there but he was not really there," explained Manu. The Indian shooter returns home with a lot of learnings and surely is hoping to do better in future.

(The above story first appeared on LatestLY on Aug 01, 2021 12:39 PM IST. For more news and updates on politics, world, sports, entertainment and lifestyle, log on to our website latestly.com).