Nick Kyrgios and Stefano Tsitsipas were fined $4000 and $10000 respectively for their bad conduct during the third-round Wimbledon clash. Kyrgios hit the balls recklessly into the crowd despite several warnings from the Wimbledon match referee. 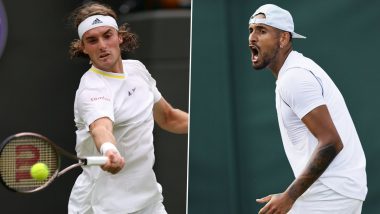 Nick Kyrgios and Stefanos Tsitsipas both were handed one of the biggest fines in Wimbledon history following a heated clash between them in a third round match in the 2022 Championships. The Greek tennis star, Kyrgios has been fined the joined biggest Wimbledon fine as he has been instructed to pay a sum of $10,000 immediately due to his misconduct in the pitch. On the other hand, Kyrgios, who was seen spitting in the direction of the sitting fans in his first-round match against Paul Jubb, has been ordered to pay $4000.

The third-round match, which saw Tsitsipas getting kncoked out by Kyrgios, has been talk of the tournament due to the things that happened during the game. The Greek top-seeded player were given two warnings by the match referee for throwing the ball recklessly into crowd and hitting very hard into the backboard.

The Australian maverick Kyrgios was fined due to his antics in the game. He kept going to the match referee and Wimbledon officials to appeal against Tsitsipas' in-game offense.  Roger Federer Meets Rafael Nadal At Wimbledon 2022 (See Post)

According to Wimbledon rules and regulations, players can be given penalty up to $20,000 for any 'offensive activity' or 'poor sportsmanship' and 'usage of abusive language' during the match. If any of these happen in a match, players can be fined, and even can be banned from the tournament.

(The above story first appeared on LatestLY on Jul 04, 2022 01:24 PM IST. For more news and updates on politics, world, sports, entertainment and lifestyle, log on to our website latestly.com).