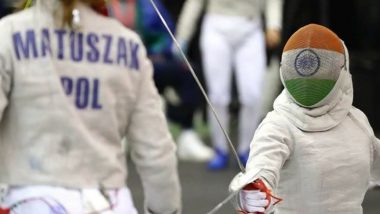 Born on 27th August in 1993 in Chennai, the exceptional fencing player Bhawani Devi is a name to reckon with. She has created history by becoming the first Indian women fencer to qualify for the Olympics. Bhawani Devi has lent a new identity to India in the discipline of fencing and has earned praise at the international level for her hardwork and gumption. Sports Minster Kiren Rijiju Makes a Heartfelt Appeal Ahead of Tokyo Olympics 2020, Wants Every Indian to Cheer for Athletes.
Sword Fighting was introduced in the schools of Tamilnadu in 2004, it was then that Bhawani Devi entered into the world of the combat sport. Bhawani played her first international match in Turkey when she was merely 14.
Bhawani Devi began her incredible journey by winning medals in the team events. The  Indian fencing team won  the silver medal in the Commonwealth Games 2009 in Malaysia, the international open 2010 in Thailand and cadet Asian Games 2010 in the Philippines. In 2012, Bhawani won her first individual Bronze medal in the Junior Commonwealth Championship at Jersey, whereas the team won the silver medal.

Bhawani Devi bettered her performance in the 2014 Asian Games in the Philippines and went on to win the silver medal. She became the first Indian to achieve this feat. A year later , she won silver in the under-23 Asian

Championship in Mongolia and the Flemish Open in Belgium.

In 2017 in Canberra Bhawani created history by winning the gold medal in the senior Commonwealth Fencing Championship and becoming the first Indian to do so. Bhawani Devi attributes her success to her parents.

Currently, Bhawani Devi is rigorously preparing for the Tokyo Olympics. She mentioned her possible chance and her ongoing preparation for the Olympics.

(The above story first appeared on LatestLY on Jun 15, 2021 11:51 AM IST. For more news and updates on politics, world, sports, entertainment and lifestyle, log on to our website latestly.com).