The International Olympic Committee (IOC) said on Wednesday that an official from the IOC Refugee Olympic team had tested positive for COVID-19 before the departure to Tokyo. 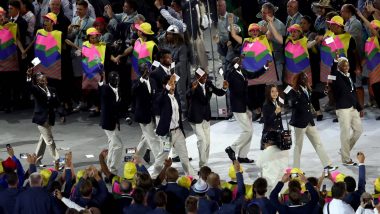 Doha, July 14: The International Olympic Committee (IOC) said on Wednesday that an official from the IOC Refugee Olympic team had tested positive for COVID-19 before the departure to Tokyo.

In the last few days, the IOC Refugee Olympic team came together for a Welcome Experience in Doha, Qatar. Twenty-six of the 29 athletes and 11 officials participated in the event.  Tokyo Olympics 2020: Check Out Full List of Countries Participating at Summer Games

The official, who tested positive on the follow-up test, was immediately isolated by Qatari Public Authorities. He is currently asymptomatic and doing well. The tests of all other members of the team (athletes and officials) returned negative. But the refugee team's departure to Tokyo has now been delayed.

"The official was single-vaccinated and followed all COVID-19 countermeasures prior to departure and during the Welcome Experience. As a consequence, it was decided that the team would currently not travel to Tokyo and will continue their training in Doha while being tested daily. The IOC, in cooperation with the Qatar Olympic Committee, is supporting the team and evaluating the situation. The next steps will be communicated once they are decided," said a statement from the IOC.

The statement also said that those who did not take part in the Welcome Experience in Doha -- Ahmad Alikaj (judo) and Abdullah Sediqi (taekwondo) -- were due to arrive in Tokyo later on Wednesday. The duo is accompanied by coach Alireza Nassrazadany. All three are going to Tokyo directly from their respective training camps.

(The above story first appeared on LatestLY on Jul 14, 2021 06:01 PM IST. For more news and updates on politics, world, sports, entertainment and lifestyle, log on to our website latestly.com).