Year Ender 2020: From Kobe Bryant to Diego Mardona, List of Sporting Legends Who Passed Away This Year

Year 2020 will always be remembered as the year when the sporting universe lost some of its biggest gems. This year will always find a page in chronicles of sporting history for the extraordinary events, the abrupt halt of the sporting world and its renewal as well as the loss of some of the finest sports heroes in history. 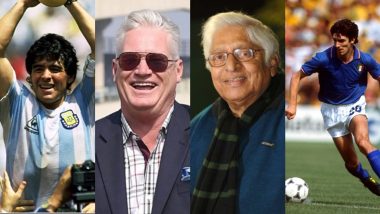 Every year is filled with sporting dramas. We cherish some. Regret others. And are left heartbroken by some. New stars breakthrough every year. Some find success and reach new highs. Some careers come to an end while others fall from glory and some see their careers hamstrung by injuries. Year 2020 was somewhat similar. This was an extraordinary year bordered around a global pandemic that brought the entire sporting calendar – and the globe in a larger context – to a halt. Sporting events were either cancelled or postponed as the world battled to survive the ravages of the coronavirus pandemic. Year Ender 2020: MS Dhoni, Iker Casillas and Other Major Sport Stars Who Announced Retirement.

The pandemic aside, year 2020 will also always be remembered as the year when the sporting universe lost some of its brightest gems. This year will always find a page in the chronicles of sporting history for the extraordinary events, the abrupt halt of the sporting world and its renewal, as well as the loss of some of the finest sports heroes in history. Legends and icons like Kobe Bryant, Diego Maradona, Balbir Singh Sr., Chuni Goswami, Paolo Rossi, Chetan Chauhan, Dean Jones, P.K. Banerjee and Rajinder Goel were some greats who sadly passed away this year leaving behind their legacies.  Take a look at the list of sportsters who died this year. Year Ender 2020: Novak Djokovic’s Moment of Madness, Naomi Osaka’s Silent Fight Against Racial Injustice and Other Top Tennis Moments.

An NBA great and one of the greatest basketball player of all-time, Bryant died after a helicopter crash on January 26. Bryant was a five-time NBA champion and fourth in the all-time scoring records. He spent his entire career with LA Lakers and is often credited for taking the NBA global.

Maradona had the world at his feet when he almost singlehandedly led Argentina to World Cup glory in 1986. But his impact was greater in Napels where he led Napoli to the club’s first and last Serie A titles. Maradona lifted two Serie A trophies among other titles with Napoli and established himself as one of the greatest to have played the game of football. The little genius sadly passed away on November 25 after a sudden cardiac arrest.

A three-time Olympic gold medallist, Balbir Singh Sr. is regarded as one of the greatest hockey players of all-time. He was part of the golden Indian hockey team that clinched top honours in three consecutive Olympic Games. That Balbir Singh Dosanjh was Independent India’s first sporting hero can be seen in the fact that he was the first athlete to be honoured with the prestigious Padma Shri award. Balblir Singh passed away on May 25 after a prolonged illness.

He formed a formidable opening partnership with Sunil Gavaskar during his playing days and was also a sitting member of the Uttar Pradesh Vidhan Sabha at the time of his death. Chauhan played 40 Test matches for India and scored 2084 runs with the help of 14 half-centuries in an international career that lasted longer than a decade. Chauhan died because of a COVID-19 infection on July 12 after suffering a multiple-organ failure.

Chuni Goswami was a master athlete. He excelled in not one but two different sports. Goswami captained the Indian national football team at the 1960 Olympics in Rome and also led the country to the gold medal at the 1962 Asian Games in Indonesia. Goswami was also part of the Indian side that clinched silver two years later at the Asia Cup. Post his football career, Goswami took up cricket and represented Bengal in two Ranji Trophy finals. He died at the age of 82 on April 30 after a prolonged illness.

Dean Jones was a pioneer of power hitting, surging forward and running risky singles in One-Day cricket. He is credited for revolutionising ODI cricket.  His stylish fielding earned him many applause and accolades from the fans. Jones was part of the victorious 1987 World Cup winning Australian team and went on to represent the national team in 164 ODIs and 52 Test matches. Jones wrote his name into cricketing folklore when he played a marvelous knock against India in Chepauk. His innings of 210 remains the highest individual score by an Australian in Test matches in India. Jones sadly passed away on September 24 after a cardiac arrest in Mumbai while working as a broadcaster for the IPL.

A FIFA Order of Merit awardee and named the Indian footballer of the 20th century by IFFHS, P.K. Banerjee is a football legend in every sense. He contributed to football both when in the field and later off it. He represented the national team in three consecutive Asian Games between 1958 and 1966 and was part of the side that clinched the gold medal at the 1962 edition. Banerjee was part of the side that reached the semi-finals of the 1956 Olympics. After his retirement, Banerjee turned to coaching and guided Mohun Bagan to a historic treble and then served the national team in several roles. P.K. Banerjee passed away on March 20, 20202 at the age of 83.

He remains one of the unluckiest cricketers to have not played a match for the Indian national team. Rajinder Goel remains the highest wicket-taker in the Ranji Trophy with a record 637 wickets to his name. A left-arm spinner, Goel never earned a cap for the national team due to the presence of the spin quartet especially Bishan Singh Bedi, who is often regarded as the greatest left-arm spinner. Goel passed away at the age of 77 due to illness on June 21.

Accused of bribery and handed a ban for three years, Paolo Rossi withstood all to lead Italy to a World Cup triumph in 1982. Pablito scored six goals in the 1982 edition, which included a hat-trick in the 3-2 win against a flamboyant Brazil, two in the semi-final win over Poland and the opening goal in the final against West Germany. He became an overnight hero in Italy after lifting the World Cup and ranks as one of the greatest footballers of all-time. Paolo Rossi remains one of only three footballers to win the World Cup, Golden Boot and the Golden Ball at a single tournament. Rossi died at the age of 64 due to lung cancer on December 9.

(The above story first appeared on LatestLY on Dec 29, 2020 10:23 AM IST. For more news and updates on politics, world, sports, entertainment and lifestyle, log on to our website latestly.com).