Sports were halted, tournaments cancelled and everyone had to remain indoors. It wasn’t until late August that sports hit the arena again with cautions, empty stadiums and coronavirus protocols. Tennis resumed quite controversially with the infamous Adria Tour organised by Novak Djokovic which ended with most players contracting the COVID-19 virus. 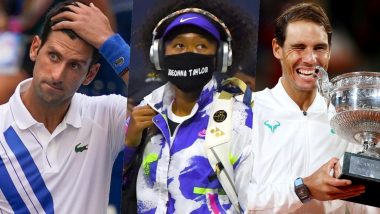 In a year of tragedy and loss, of mournings and misfortunes, sports provided a brief but soothing relief and tennis played a big hand in bringing the renewed hope that life could be normal again. This was supposed to be a year of the best of sporting dramas with the men’s and women’s T20I World Cups, the UEFA Euros 2020, Lewis Hamilton’s chase of Michael Schumacher’s record F1 Championships titles, the Grand Slams and then the biggest of them all – the Olympics. All bundled in as a gift from 2020 to sports fanatics. None then, and perhaps none now, could have foreseen a virus, birthed in 2019, bringing the world to a standstill. A pause that didn’t look like it would end. The world had gone into a lockdown. Australian Open 2021 Start Delayed, Scheduled to Start from February 8: ATP.

Life took a big hit and so did everything around. Sports were halted, tournaments cancelled and everyone had to remain indoors. It wasn’t until late August that sports hit the arena again with cautions, empty stadiums and coronavirus protocols. The Bundesliga resumed and so did most footballing leagues across Europe, F1 was back to the racing course. Tennis had resumed quite controversially with the infamous Adria Tour organised by Novak Djokovic which ended with most players, including Djokovic, his wife and his coach, contracting the COVID-19 virus. Officially tennis re-launched itself with the Palermo Open.

The year 2020 though had started bright and beaming with Djokovic beating Rafael Nadal’s Spain to lead Serbia to the inaugural ATP Cup title. Djokovic then returned to Melbourne Park for the Australian Open and beat Dominic Thiem for his record eighth Australian Open title– no men has won more. He also won the Dubai Championship and extended his winning streak. Sofia Kenin clinched her maiden Grand Slam win with the Australian Open title and also won the Lyon Open in WTA Tour while Simona Halep took the Dubai Championships before tennis came to a halt in March.

Controversy had already erupted with Djokovic’s ill-fated Adria Tour and the Serbian added ill-judgement to it with a brain-fade at the US Open where he was disqualified from the fourth round after accidentally hitting a line judge with a ball in rage between points. Roger Federer didn’t play post the lockdown and Nadal took the opportunity to equal his count of 20 Grand Slam titles with a record 13th French Open win. Dominic Thiem rose from the ashes of three Slam-final defeats to clinch the US Open 2020. Naomi Osaka showed the world what influence sportspersons had on society and justice en route her second US Open win.

Tennis in 2020 was filled with top moments and talking points in the few months it was played amidst a global pandemic. Some left you in anger while some filled you with joy and some more left you confused (like Djokovic’s brain-fade moment. why O why!). Let us take a look at some of the top moments in tennis in 2020.

This was Djokovic’s year. No matter which way you look at it. He was always on the move and on the front-page. The ATP Cup win with Serbia and a record eighth Australian Open title helped him regain the top spot and the Serbian held on to it. Djokovic ended 2020 as the men’s No 1 and made it a record-equalling sixth time he had finished a tennis calendar as a year-end No 1 rank. He played nine tournaments and won five this year. The Australian Open win made him the first in the open era to win a Grand Slam in three different decades and Djokovic added to the accolade with a record 36th Masters title at the Rome Open. He lost the French Open final to Nadal and that unsettled his otherwise invincible season but Djokovic still ended it with a 41-5 win/loss record to the good.

World No 1 Novak Djokovic Defaulted From US Open

World No. 1 Novak Djokovic was defaulted from the US Open after he struck a lineswoman with a ball.

Just everything and anything is happening in this damn year. #fedup #2020 #Djokovic pic.twitter.com/LzSIVdjRfH

But sandwiched between his season of greatness was also his little moments of madness. A raging Djokovic hit a line-judge with the ball at the US Open fourth round. He did hit accidentally but that moment of rashness snapped his title-winning run and a possible fourth US Open title. Djokovic was ruled out of the tournament by default. He had already courted controversy by organising the Adria Tour despite calls to not go ahead, and Djokovic once again hit the headlines when he shockingly resigned from the ATP Players’ Council and formed a separate players' group.

Osaka blew her chance to regain the world No 1 rank when she called an end to her season before the Rome Masters due to a knee injury. Off the court, she has become one of the most loved and followed tennis stars of our times. Her outspokenness and careful articulation when needed has made her not only a great tennis player but an example of what it could do to society when influenced people act against injustice.

Naomi Osaka on Her Activism During US Open 2020

On her path to victory, #Naomi embraced her platform, using it to denounce structural racism, police brutality and complacency, and affirming BlackLivesMatter.https://t.co/DeMoeFPnWZ pic.twitter.com/VVVwyw2lpC

At the 2020 US Open, where she clinched her third slam and a second title at the Flushing Meadows, Osaka wore masks bearing names of black victims of racial violence for each of her matches. She played seven times, including the final, and each time she wore a mask which had the name of a black victim killed or dead by police brutality. It was her own way of talking, silently taking the fight to the oppressors and showing the world had place for a silent yet bold protests too. The killing of George Floyd galvanised her and she said she made the move because she wanted “to make people start talking.”

Nadal had only played the Rome Masters heading into the French Open having earlier opted out of Cincinnati Masters and US Open to remain in Europe and focus on clay. At Rome, he was playing for the first time in seven months and showed he was still rusty after losing the quarter-final to Diego Schwartzman in straight sets. He is, of course, the king of Paris. A three-time running defending champion and 12 time-winner of the clay-court Slam in the last 15 years. But the schedule, conditions, courts and ball had changed. And when Djokovic won at Rome, Nadal’s streak for the first time looked fallible.

But when both met in the final at Roland Garros two weeks later, Nadal was indomitable and Djokovic’s invincible run was coming to an end. In what was perhaps the most lopsided of all clashes between these two, Nadal bageled Djokovic in the first, won in straight sets and took the Holy Grail which takes him level on Grand Slam wins with Federer. Both are tied on 20 majors and Nadal looks the favourite now to topple his long-time rival and friend.

When Nagal made his Grand Slam debut as a qualifier against Roger Federer at the 2019 US Open, he had already spurred hope. That he took the first set and avoided a straight-sets defeat was cherry on the cake. A year later, Nagal was back at the Arthur Ashe Stadium. This time as a direct qualifier courtesy his world no 127 rank and a series of withdraws due to travel restrictions and health concerns.

Nagal faced Bradley Klahn in the opening round and beat the American in four sets to become the first Indian, since Somdev Devvarman at the same stage in 2013, to win a singles match at any Grand Slam event. Nagal then faced eventual champions, Dominic Thiem, in the second round and bowed out but not before troubling the Austrian.

Thiem finally overcame his three slam final-defeats heartbreak and actually won one. The Austrian beat Alexander Zverev in the US Open 2020 final to lift his maiden Grand Slam title. Thiem’s major win was the first a player born in the 1990s had lifted a Grand Slam title and also the first time since 2014 a player, other than the big three, had won a Grand Slam event. The US Open win was Thiem’s only title in 2020 but it was the one he would have wanted most after the Australian Open final defeat to Djokovic. It was a special win but seemed to be getting out of his hand before Thiem came back from two sets down to script history.

(The above story first appeared on LatestLY on Dec 21, 2020 01:14 PM IST. For more news and updates on politics, world, sports, entertainment and lifestyle, log on to our website latestly.com).