Amitabh Bachchan Accidentally Teased the Most Awaited New OnePlus 6 Smartphone on Twitter Ahead of its India Launch; Pics Deleted 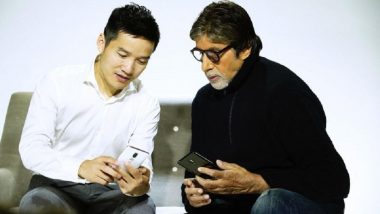 OnePlus 6 is the most anticipated smartphone which is scheduled to launch in India on May 17 that has been accidentally teased by Amitabh Bachchan on Twitter. The actor has been with the Chinese smartphone maker in India for couple of years now. The Veteran Actor was also seen at the launch event of OnePlus 5 last year. And, as the next-in flagship device is scheduled for its arrival on May 17, it is believed that Big B will also be seen at the launch event. With numerous leaks and rumors rolling out of the official launch, the actor himself gave out a leak through this twitter handle. See More: OnePlus 6 India Launch Tickets Immediately Goes Out of Stock

Launch Invites go live today on https://t.co/4u02gqa5nb at 10am sharp! Head to @OnePlus_IN for real time updates on the launch and the invites! pic.twitter.com/GrwBkvI4s4

The actor himself posted an image on its Twitter handle with OnePlus' CEO - Pete Lau holding OnePlus 6 black and white colour models. However, the Twitter post was deleted later on. Going by the image, it is evident that the smartphone will feature shiny body with glass design. It will also carry a vertically aligned dual camera and fingerprint sensor at the rear. Read More: OnePlus 6 x Marvel Avengers Limited Edition Box Featuring Avengers Logo Teased Ahead of 17 May India Launch

The Chinese smartphone maker sold the launch event tickets today at 10am that immediately when out of stock. In terms of specification, the new OnePlus 6 flagship device will be powered by Qualcomm's Snapdragon 845 SoC mated with up to 8GB of RAM and up to 256GB of memory storage. The company has officially confirmed that the smartphone will feature either IP67 or IP68 certification for dust and water resistance. See Also: OnePlus 6 Becomes First Smartphone to Shoot Cover Photo For This Fashion Magazine in India

As far as the prices are concerned, the smartphone is expected to be slightly pricier than the outgoing model. Exact details, specifications and prices of the smartphone will be announced on the launch day itself. Moreover, the company will also introduce OnePlus 6 x Marvel Avengers Special Edition alongside the regular smartphone.

(The above story first appeared on LatestLY on May 08, 2018 12:13 PM IST. For more news and updates on politics, world, sports, entertainment and lifestyle, log on to our website latestly.com).