Apple has officially announced its first special event of the year on Tuesday which will focus on the introduction of a third-generation iPhone SE, a refreshed iPad Air, and new Silicon-powered Macs. 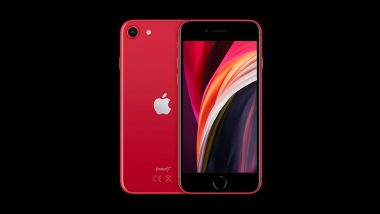 San Francisco: Apple has officially announced its first special event of the year on Tuesday which will focus on the introduction of a third-generation iPhone SE, a refreshed iPad Air, and new Silicon-powered Macs. The event will be pre-recorded and will be streamed on Apple's website and YouTube. M2 Silicon Chip Evidence Spotted Ahead of Apple Event 2022: Report.

The tech giant has a large raft of rumoured products set to launch throughout 2022. While some are expected to arrive later in the year, such as the usual fall "iPhone 14" refresh, there's a collection of products that could appear at this earlier event.

The main focus will probably be on the iPhone SE, with a third-generation device expected to pack 5G connectivity for the first time. The upcoming iPhone will come in 64GB, 128GB, and 256GB storage options and three colours - white, black, and red.

Some rumours point to it consisting of a specifications bump while having the same design as the second-generation model, complete with a 4.7-inch display and Touch ID.

The iPad Air 5 is also said to be a potential candidate for the event, with speculation putting it as having similar feature upgrades as the iPad mini 6, including an upgrade to the A15 Bionic. 5G connectivity and an upgrade to the FaceTime HD camera to a 12MP ultra-wide version with Center Stage support have also been touted.

(The above story first appeared on LatestLY on Mar 07, 2022 02:58 PM IST. For more news and updates on politics, world, sports, entertainment and lifestyle, log on to our website latestly.com).