According to research by the Center for Countering Digital Hate, an average of 1,282 tweets with slurs against Black people appeared daily on Twitter before Musk took over and that number jumped to 3,876 after he acquired the company. 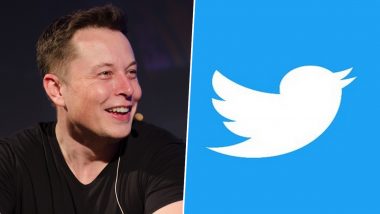 New Delhi, December 3: After a new report claimed that hate speech soared on Twitter after Elon Musk took over, the Tesla CEO on Saturday denied the claims, saying the findings are "utterly false".

According to research by the Center for Countering Digital Hate, an average of 1,282 tweets with slurs against Black people appeared daily on Twitter before Musk took over and that number jumped to 3,876 after he acquired the company. Elon Musk Releases Internal 'Twitter Files' Detailing Censorship and Suppression of Information at Twitter.

During the week of Musk's tweet, hate speech impressions increased even further to 4,650 tweets a day on average. The average number of likes, replies, and retweets on posts with slurs was 13.3 in the weeks leading up to Musk's Twitter 2.0.A Since the takeover, average engagements on hateful content has jumped to 49.5, according to the report. Musk replied to the findings, saying "hate speech impressions (# of times tweet was viewed) continue to decline, despite significant user growth". Elon Musk Says 'Twitter Failed in Trust and Interfered in Elections, Twitter 2.0 Will Be More Effective'.

"@TwitterSafety will publish data weekly. Freedom of speech doesn't mean freedom of reach. Negativity should and will get less reach than positivity," he mentioned. "There are about 500 million tweets per day and billions of impressions, so hate speech impressions are less than 0.1 per cent of what's seen on Twitter," Musk further argued.

According to the Center for Countering Digital Hate report, racial slurs against transgender people increased 62 per cent since Musk bought Twitter Musk said that Twitter is being fair when extremists on the far right and far left are simultaneously upset. "Twitter aims to serve the center 80 per cent of people, who wish to learn, laugh & engage in reasoned debate," said the new Twitter CEO.

(The above story first appeared on LatestLY on Dec 03, 2022 10:30 AM IST. For more news and updates on politics, world, sports, entertainment and lifestyle, log on to our website latestly.com).