Microsoft Xbox Partners With Adidas for Its First Console-Inspired Sneakers

Microsoft Xbox has announced a global partnership with adidas to unveil its first console-inspired sneaker in celebration of the 20th anniversary of Xbox. 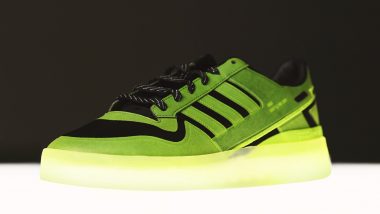 San Francisco: Microsoft Xbox has announced a global partnership with adidas to unveil its first console-inspired sneaker in celebration of the 20th anniversary of Xbox. The collab features an exclusive new adidas Originals by Xbox sneaker, the Xbox 20th Forum Tech, with translucent green details inspired by the special edition release of the original Xbox console for the launch of Halo: Combat Evolved in 2001, marking the first-ever generation of gaming at Microsoft. Microsoft Xbox Series X Halo Infinite Limited Edition Console To Be Launched on November 15, 2021.

"This is just the beginning of our partnership with adidas, and over the next few months we'll continue to mark our 20th anniversary by launching additional sneakers inspired by past and present Xbox console generations, including the first-ever sneaker available for purchase by our fans later this year," the company said in a statement.

As a part of our ongoing 20th anniversary celebrations, Xbox has also partnered with Trolli -- a brand that truly embodies the neon-lit, fantastical worlds of gaming-to unveil limited-edition packaging inspired by some of your favorite titles available with Xbox Game Pass.

(The above story first appeared on LatestLY on Oct 07, 2021 01:05 PM IST. For more news and updates on politics, world, sports, entertainment and lifestyle, log on to our website latestly.com).