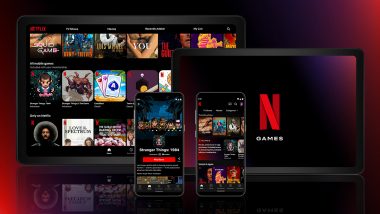 Just like its series, movies and specials, Netflix wants to design games for any level of play and every kind of player, whether a beginner or an experienced gamer.

Tomorrow, Netflix Games will start rolling out on the Netflix mobile app. First on Android, with iOS on the way.

It’s early days, but we’re excited to start bringing you exclusive games, with no ads, no additional fees and no in-app purchases. pic.twitter.com/ofNGF4b8At

Given that you are a Netflix subscriber, you can pick the game that you want to play through the dedicated games row or games tab available in the app. Select it, and then you will be directed to the Google Play Store listing. Then you will have to install the game and use your Netflix credentials to start playing the game.

It is important to note that you can also play these games on multiple mobile devices from the same Netflix account. Moreover, Netflix is not charging any additional fees for these mobile games. It also does not serve any advertisements or has in-app purchases. While some games may require an internet connection, others will be available to play offline. To attract more customers, Netflix has introduced these in different languages including Punjabi, Hindi, Marathi, Tamil and Bengali.

(The above story first appeared on LatestLY on Nov 03, 2021 10:11 AM IST. For more news and updates on politics, world, sports, entertainment and lifestyle, log on to our website latestly.com).