Ahead of their launch, the support pages of the handsets have gone live with model numbers - SM-A525F and SM-A725F, respectively. 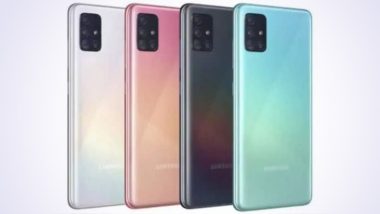 Samsung, the South Korean technology giant is expected to launch the Galaxy A52 and Galaxy A72 phones in the Indian market very soon. Ahead of their launch, the support pages of the handsets have gone live with model numbers - SM-A525F and SM-A725F, respectively. Both the handsets are expected to come with Super AMOLED displays, quad rear cameras, Snapdragon 720G SoC, 25W fast-charging support and more. Samsung Galaxy A12 with 5,000mAh Battery Launched in India at Rs 12,999.

We expect the company to announce the prices of these phones very soon. Official prices will go official during the launch. The Galaxy A52 smartphone is likely to cost somewhere around Rs 25,000 whereas the A72 might be launched around Rs 28,000.

For photos and videos, the Galaxy A52 will come equipped with a quad rear camera module. It will include a 64MP main shooter assisted by an 8MP ultra-wide lens, a 5MP macro lens, and a 2MP depth sensor. The Galaxy A72, on the other hand, will sport a 12MP ultra-wide sensor with an 8MP telephoto shooter. For selfies, both the phones will pack a 32MP front snapper.

Under the hood, there will be a Qualcomm Snapdragon 720G processor which will be clubbed with up to 8GB RAM and up to 256GB of onboard storage. Both the phones will run on Android 11-based One UI 3.1. The handsets will be backed by a 4,500mAh and 5,000mAh battery, respectively, with 25W fast-charging technology.

(The above story first appeared on LatestLY on Feb 19, 2021 11:52 PM IST. For more news and updates on politics, world, sports, entertainment and lifestyle, log on to our website latestly.com).