South Korean tech giant Samsung is likely to power its upcoming smartphone -- Galaxy M52 5G -- with Snapdragon 778G chipset. A GSMArena report said that the smartphone will sport a quad-camera setup with a 64MP primary camera. 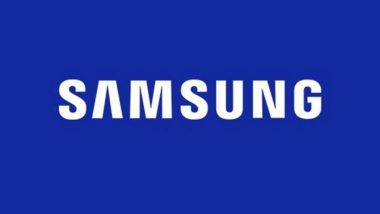 Seoul: South Korean tech giant Samsung is likely to power its upcoming smartphone -- Galaxy M52 5G -- with Snapdragon 778G chipset. According to GizmoChina, a previous report had suggested that the Galaxy M52 5G could be a rebadged edition of the Galaxy F52 5G, which was announced in China last month. Samsung Galaxy F22 India Launch Expected Soon, Likely To Be Priced Below Rs 15,000.

While the Snapdragon 750G chip is powered by the F52 5G, the appearance of the M52 5G at the Geekbench benchmarking platform suggests that it may arrive with Snapdragon 778G. Hence, it now appears that the M52 could be a new CPU variant or an entirely different phone as compared to the F52 5G, the report said.

A GSMArena report said that the smartphone will sport a quad-camera setup with a 64MP primary camera. A 12MP ultrawide unit and 5MP dedicated macro shooter are also on the menu, meaning the fourth camera will likely be a mere depth sensor.

The front is said to feature a 32MP selfie snapper. The Galaxy M52 5G has emerged with its SM-M526BR on the benchmarking site. The listing reveals that it has 6GB RAM and it boots to Android 11 OS. The "lahaina" codename mentioned in the motherboard field in the listing belongs to the Snapdragon 888.

However, the Adreno 642L GPU mentioned in the source code of the listing suggests that the phone has Snapdragon 778G, and not the SD888. The handset scored 776 and 2877 points in the single-core and multi-core tests of Geekbench, respectively. The other specifications of the phone are under wraps. Earlier this month, Honor announced the Snapdragon 778G SoC-powered Honor 50 and Honor 50 Pro handsets. Speculations are rife the rumoured Motorola Edge 20 will also feature the same chip.

(The above story first appeared on LatestLY on Jun 30, 2021 04:47 PM IST. For more news and updates on politics, world, sports, entertainment and lifestyle, log on to our website latestly.com).