Samsung has witnessed a robust demand for its fourth-generation of foldables in India, registering more than 50,000 pre-bookings for Galaxy Fold4 and Galaxy Flip4 in less than 12 hours. 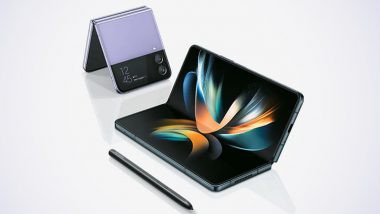 The record figures came on Day 1 of the pre-booking opening for foldables on August 16.

"Samsung is targeting to sell 1.5 times more foldable phones this year. We are confident of meeting our target because the new foldable phones come with huge upgrades as compared to last year," Pullan told IANS.

He attributed the huge pre-book success to the company's strategy to expand the foldable experience in India this time. For Fold4 and Flip4, Samsung has expanded its retail network, taking the premium phones to over 10,000 cities, including tier 2 towns and further. This is double the number of retail outlets as compared to last year for the foldable phones, according to Pullan.

Samsung has also employed more than 12,000 demo units of Fold4 and Flip4 in India to ensure that consumers get great experience with these devices before finalizing their purchase.

"The Fold4 is the most powerful PC in your pocket with the Snapdragon 8+ Gen1 processor and flagship 50MP camera. The Flip4 is the ultimate device for young consumers who are looking to express themselves with its Flex camera," Pullan noted.

Samsung led the broader smartphone market with 22 per cent value market share in the first six months of the year. Available in Bora Purple, Graphite and Pink Gold colours, Galaxy Z Flip4 is priced at Rs 89,999 for the 8GB+128GB variant and Rs 94,999 for the 8GB+256GB variant.

(The above story first appeared on LatestLY on Aug 17, 2022 05:10 PM IST. For more news and updates on politics, world, sports, entertainment and lifestyle, log on to our website latestly.com).