Antartica Loses Another Big Chunk of Ice; Here 5 Major Ways In Which Glacier Melting Can Affect The Planet

Antarctica recorded a new record temperature of 20.75 degrees Celsius for the first time on the continent earlier this week, scientists said. Glacier melting owing to warm temperatures are worrying as it comes with an array of environmental issues even affecting human lives. 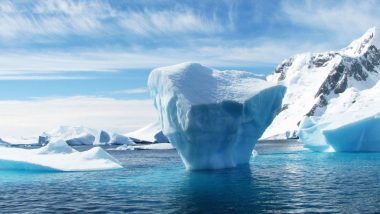 Antarctica recorded a new record temperature of 20.75 degrees Celsius for the first time on the continent earlier this week, scientists said. Although, Brazilian researcher Carlos Schaefer said that the reading at a monitoring station on Seymour Island "has no meaning in terms of a climate-change trend," the continent is witnessing warmer temperatures due to global warming. Glacier melting owing to warm temperatures are worrying as it comes with an array of environmental issues even affecting human lives. Antarctica Registers Record Temperature of 20.75 Celsius.

According to satellite images taken by European Space Agency (ESA), recently, an iceberg the size of Atlanta broke off Pine Island Glacier (PIG) on the edge of Antarctica. It is around 300 square kilometres and got quickly fragmented. The imbalance in the glacial system impacts results in the warmer ocean, reduced snowfall, floods among many other problems. Here is a list of issues that could be caused due to the melting of the glaciers.

Melting glaciers can trigger avalanches and floods. Although there will be an increase in water supply in the initial days, however as the glaciers shrink, the supply will reduce. People who rely on rivers which get water from glaciers will be the most affected.

Global warming has been leading to increasingly acidified oceans affecting corals and other sea life. An increase in global warming could affect the survival of the organisms.

Melting ice will disrupt weather patterns and help regulate the oceans resulting in extreme temperatures. While some regions will witness hot weather others will be frozen rains in some, flood in others.

Oceans absorb one-third of human-generated carbon dioxide and keep it out of the atmosphere. But as glaciers continue to melt, ocean CO2 levels will rise and lose their ability to absorb any. It could change conditions for marine animals and organisms also.

Warm waters will affect the life of fish in oceans. Agricultural land that depend on the rain will be affected in the long run. Eventually, freshwater from glaciers will reduce causing drying of the land not suitable for farming. This causes an overall reduction in agricultural production.

Various efforts are being taken to reduce the impact. For example, France is planning to restrict access to Mont Blanc in the Alps to curb reckless summit attempt and protect the mountain and its surrounding regions. Glacier melting is evidence of global warming and the effect on the environment will have a terrible impact in the future. While the effect cannot be completely contained, it can be reduced by reducing carbon footprints and opting for greener options. Although individual changes make a difference, there is a need for organisations and government to adopt the change to save the planet from further destruction.

(The above story first appeared on LatestLY on Feb 15, 2020 03:31 PM IST. For more news and updates on politics, world, sports, entertainment and lifestyle, log on to our website latestly.com).