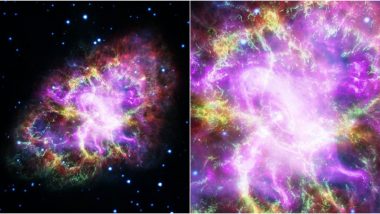 NASA has released a gorgeous photo of the Crab Nebula is a supernova remnant in the constellation of Taurus. The photo shows the stunning beauty that graces the outer space, much beyond what our eyes can reach. NASA Chandra X-ray Observatory’s official Instagram page shared photos of the event people leaving stunned. They posted the photo with the caption, "The Crab supernova was observed in 1054 CE and its remnant has become one of the most famous objects in the #sky. At the center of the remnant is a dense neutron star about 30 kilometers in diameter that rotates once every 33 milliseconds — a pulsar!⁣" NASA Releases Stunning Images of Cosmic World Processed by Chandra X-Ray Observatory.

Earlier this month, scientists found that Supernova LSQ14fmg was exploding. The faraway object was discovered by a 37-member international research team led by Florida State University Assistant Professor of Physics Eric Hsiao. The exploding star is known as a Type Ia supernova, and more specifically, a member of the 'super-Chandrasekhar' group. This supernova gets brighter extremely slowly, and is also one of the brightest explosions unlike any other. Research Team Discovers Unique Supernova Explosion.

🦀The Crab supernova was observed in 1054 CE and its remnant has become one of the most famous objects in the #sky. At the center of the remnant is a dense neutron star about 30 kilometers in diameter that rotates once every 33 milliseconds — a pulsar!⁣ ⁣ 📱Get this #incredible #pic as a new background #wallpaper for your phone or tablet: https://chandra.harvard.edu/instagram/wallpaper/⁣ ⁣ 🤔Want to #learn more about the #space #science behind the #image? https://chandra.harvard.edu/instagram/⁣ ⁣ X-ray (#Chandra): #NASA/CXC/SAO; Optical (#Hubble): NASA/STScI; Infrared (#Spitzer): NASA/JPL/Caltech; Radio (Very Large Array): NSF/NRAO/VLA; Ultraviolet (XMM-Newton): ESA/XMM-Newton⁣ ⁣ #beautiful #amazing #astronomy #astrophysics #powerful #fast #universe

After collecting data with telescopes in Chile and Spain, the research team saw that the supernova was hitting some material surrounding it. It caused more light to be released along with the light from the decaying nickel. They also saw evidence that carbon monoxide was being produced. There were also pieces of evidence of carbon monoxide being produced. According to their observations, the supernova was exploding inside what had been an asymptotic giant branch (AGB) star on the way to becoming a planetary nebula.

(The above story first appeared on LatestLY on Sep 19, 2020 07:14 PM IST. For more news and updates on politics, world, sports, entertainment and lifestyle, log on to our website latestly.com).