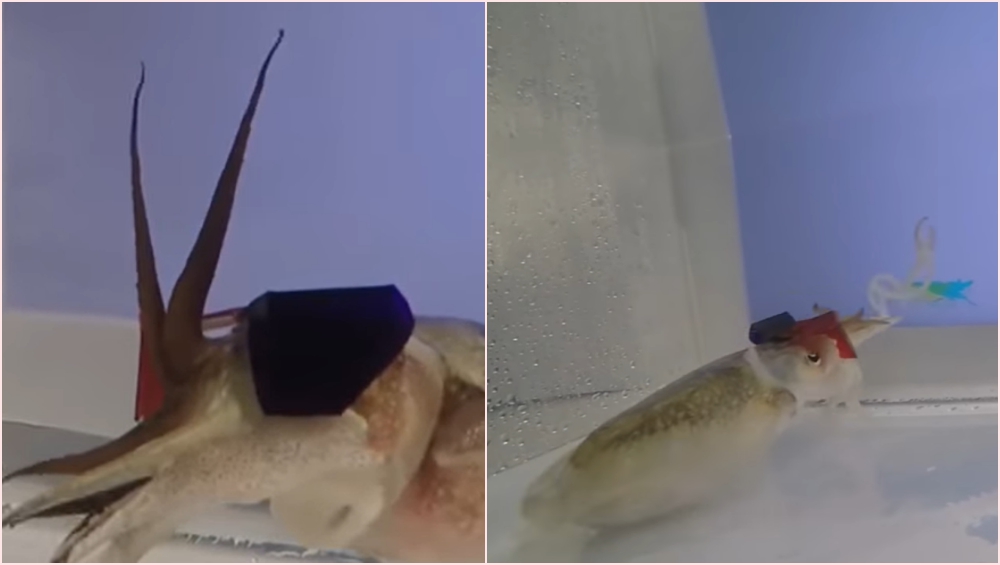 Washington, January 10: Scientists have trained cuttlefish to wear specialised 3D glasses to investigate how the cephalopods determine the best distance to strike moving prey. The research, published in the journal Science Advances, revealed cuttlefish use stereopsis -- the perception of depth produced by the reception in the brain of visual stimuli from both eyes in combination -- to perceive depth when hunting a moving target. Ancient Chinese Paddlefish, One of World’s Largest Fish, Is Officially Extinct and There Is No Hope to Bring It Back!

Cuttlefish catch a meal by deploying their tentacles and, to be successful in their strike, they must compute depth to position themselves at the correct distance from the prey. If they are too close, the prey may be spooked and escape while if they are too far, the tentacles will not reach, according to the researchers from the University of Minnesota in the US.

To test how the cuttlefish brain computes distance to an object, the team trained cuttlefish to wear 3D glasses and strike at images of two walking shrimp, each a different colour displayed on a computer screen at the Marine Biological Laboratory in Woods Hole, US. The images were offset, allowing for the researchers to determine if the cuttlefish were comparing images between the left and the right eyes to gather information about distance to their prey.

The process of comparing the images is called stereopsis, and is the same way humans determine depth. Depending on the image offset, the cuttlefish would perceive the shrimp to be either in front of or behind the screen. The cuttlefish predictably struck too close to or too far from the screen, according to the offset. "How the cuttlefish reacted to the disparities clearly establishes that cuttlefish use stereopsis when hunting," said Trevor Wardill, an assistant professor at the University of Minnesota.

Through this process, the researchers also found the mechanism that underpins cuttlefish stereopsis is likely different from humans due to the cuttlefish successfully determining the distance from anti-correlated stimulus.

It means the left and the right eye images have the same pattern, but are reversed in luminance, the researchers said. Humans cannot do this reliably, they noted. "While cuttlefish have similar eyes to humans, their brains are significantly different," said Paloma Gonzalez-Bellido, assistant professor at the University of Minnesota.

"We know that cuttlefish brains aren't segmented like humans. They do not seem to have a single part of the brain -- like our occipital lobe -- dedicated to processing vision. Our research shows there must be an area in their brain that compares the images from a cuttlefish's left and right eye and computes their differences," Bellido added.

Cuttlefish have the ability to rotate their eyes to a forward-facing position, a unique trait that sets them apart from their cephalopod relatives such as squid and octopus. It is possible that cuttlefish are the only cephalopods with the ability to compute and use stereopsis, the researchers said. Mantids are the only other invertebrate species known to use stereopsis, they said.