A marshmallow test, designed for human children, was applied on cuttlefish, where they passed graciously. A short video was uploaded on Twitter, showing how the marine animals would wait before finally feeding on a better food choice. 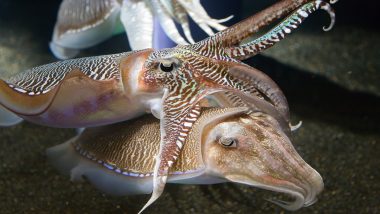 We know about high-profile marine animals, like sharks, dolphins and whales, but the cuttlefish is an equally intelligent animal. More than a hundred species of cuttlefish call Earth’s waters home, and often, they have proved their intelligence in various researchers. Besides their ability to use camouflage to sneak up on prey, it fascinates scientists. Last year, to identify how marine animals attack prey, a group of researchers trained them to wear 3D glasses. Now, another study had come up, which has shown how cuttlefish can be incredible at controlling their urges to get a better reward later. A marshmallow test, designed for human children, was applied on cuttlefish, where they passed graciously. A short video was uploaded on Twitter, showing how the marine animals would wait before finally feeding on a better food choice.

Dr Alexandra Schnell, a comparative psychologist at the University of Cambridge in England, has been digging into cephalopod behaviour and cognition by giving them tests traditionally used to measure brain power in primates and other vertebrates. Well, the squishy creatures performed remarkably well. In the new study, the marine animal was found to display self-control, when given a choice. As per the study, six subadult cuttlefish took the test, on the well-known marshmallow test.

Each animal was presented with two chambers, one containing an immediately available morsel of raw king prawn and the other was baited with live grass shrimp—that was available after a delay. The video was filmed by Schnell, lead scientists of the study. The researcher also found that even the most impatient cuttlefish could wait 50 seconds before the live grass shrimp was released. “The most surprising thing was that they were able to tolerate delays of 50 to 130 seconds. That’s comparable to what we see in large-brained animals such as chimps, crows, and parrots,” Schnell was quoted in reports.

This cuttlefish was filmed by Dr. Alexandra Schnell, who's work on self-control in cuttlefish was published on March 3 and can be seen here: https://t.co/EfoHQOS1LE pic.twitter.com/VzdKzObghs

The cuttlefish that waited for the longest also performed better during learning tests, a link which has been shown in humans and chimpanzees. The original version of this is the Stanford marshmallow test, an experiment where children are told they decide to either get a small reward immediately, like a pretzel stick or wait for at least 15 minutes for a better reward, such as the marshmallow.

(The above story first appeared on LatestLY on Mar 04, 2021 08:36 PM IST. For more news and updates on politics, world, sports, entertainment and lifestyle, log on to our website latestly.com).